IEA: The Christian Case for Capitalism 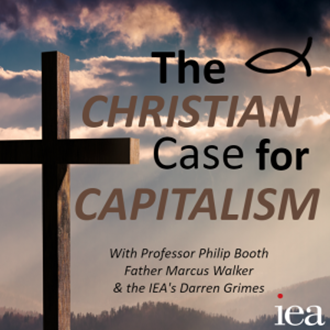 On our podcast this week, Digital Manager Darren Grimes discussed the relationship between capitalism and Christianity with our Senior Academic Fellow Philip Booth and Father Marcus Walker, Rector of St Bartholomew’s Church in London. Following recent, seemingly anti-capitalist, interventions by the Archbishop of Canterbury Justin Welby, they assessed the extent to which the Church of England can still be considered the “Conservative Party at Prayer”. They also examined the treatment of markets, free exchange and private property in scripture. Finally, they hypothesised that the decline of religion in our society has coincided with the growth of the State, and a growing sense that the government, not private institutions or families, should take responsibility for societal ills.
Guests: