The Book Review: 'The Man Who Knew: The Life and Times of Alan Greenspan' by Sebastian Mallaby 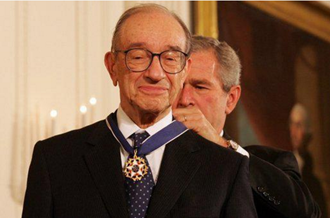 When does the irrational exuberance of markets lead to asset price bubbles? A question pondered by Dr. Alan Greenspan, former Chairman of the US Federal Reserve, in December 1996. But the phrase "irrational exuberance" - a polite way of warning that the markets were in danger of overheating - turned out to rather be prescient. This was after all the dotcom era when anything with dotcom behind its name - no matter how flawed the business plan - was a licence to print money. When the tech bubble eventually burst investors took heavy losses while Greenspan looked for a way through the morass. The markets gradually picked up, money flowed in and the public felt rich: Alan Greenspan had worked his magic and restored America's Feel Good factor. When he retired in 2006 he was lauded as a genius, a tough act to follow...yet when the global financial crisis erupted, the fault lines were traced back to him. The hero was now a villain! So why did it go wrong? Sebastian Mallaby is a journalist and author of the book 'The Man Who Knew: The Life and Times of Alan Greenspan'. He joined Share Radio's Juliette Foster in the studio.
Published: Tue 25 Oct 2016
Schedule