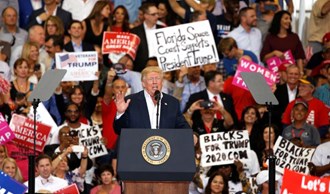 Donald Trump has made some remarks about Sweden on Friday at a rally in Florida, which seem to have caused some confusion. And Trump has continued his attack on what he calls the 'dishonest' media. There have been two petitions in the UK, for and against his state visit to the UK. MP's will debate the state visit today. Sarah Pennells was joined by Share Radio's Political Correspondent, Colin Bloom to discuss the political headlines from earlier this morning.