Keeping the four horsemen at bay 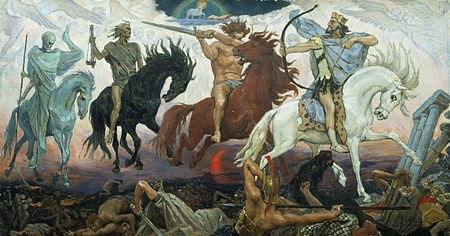 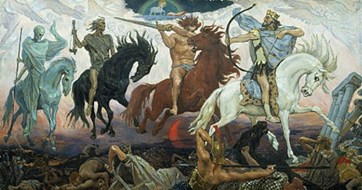 “Then I heard one of the four living creatures say in a voice like thunder, “Come!” … They were given power over a fourth of the earth to kill by sword, famine and plague, and by the wild beasts of the earth."

It’s been like watching paint dry but, looking beyond Donald Trump’s slow motion train crash, the world can start looking ahead again with a new administration at the White House.

It seems incredulous that when the popular vote is so clear, over four million ahead, we should still have to agonise over the destiny of Maricopa County; the US electoral college system is surely past its sell by date. Such a relief, therefore, that this time the end result and the popular vote are aligned.

So in this commentary we consider how the four horsemen of the Apocalypse can now be forced to retreat in the face of the incoming Biden/Harris administration.

We cannot expect Donald Trump to give up power gracefully, but give up power he must. When we look back to 2016 it seems extraordinary that he should have been able to take power in the first place, based on his three million popular vote deficit compared to Hillary Clinton.

We have argued for a ‘one person, one vote’ process for electing an EU president, in order to give the European Union democratic legitimacy, and it is now clear that a similar overhaul of the presidential voting system is urgently required in the United States. After all, the president is the one person who represents all Americans: he or she is not voted in by parliamentary representatives, unlike our British system.

But this time we have the right result, and Joe Biden and Kamala Harris can start confronting those four horsemen of the Apocalypse:

The Pale Horse is the last of the four in the book of Revelation, but it is the first that Biden needs to tackle. Covid-19 deaths in the United States are just coming up to a quarter of a million people: we cannot wait 73 days for action to be taken. He must swiftly introduce the same controls as Australia, South Korea and Japan, and get this rampant plague under control.

The Black Horse may be a slowly unfolding disaster, but climate change threatens extinction and sea level rise of cataclysmic proportions. Thank goodness that Biden gets this challenge, and is prepared to act - and that he will re-join international accords designed to harness the damage that we’re doing to the planet. He will find a warm welcome in the UK and Europe, and even China is now determined to reach carbon neutrality over the next 40 years.

The White Horse has been seen to represent the triumph and prosperity of the Roman Empire - but we all know how that ended. In those days, wealth polarisation reached such extremes of economic domination and slavery that it led to collapse: that is the inevitable outcome for extreme wealth polarisation.

Burdened with debt and trade wars, we are now on the cusp of a similarly disastrous economic collapse: but it can be addressed even at this late stage. Egalitarian capitalism is the way forward, allowing everyone to participate in wealth generation, particularly among the tech giants. We’ve shown the way forward in this commentary, by linking data harvesting to equity ownership.

Inter-generational rebalancing is also fundamental, and again we have set out a radically different approach for ensuring that disadvantaged young people are resourced and empowered to see a future of hope and opportunity.

Also, Joe Biden needs to take a leaf out of the British book of using employers as agents of public support, as was so clearly articulated by Joseph Stiglitz recently and supported by this commentary two weeks ago. Yes, use quantitative easing to print the cash, but use a furlough system to route it through the hands of employers for the benefit of both employees and former employees (who should be taken back on their funded payroll if at all possible).

And finally, the Red Horse of war and racial intolerance. It is so significant that Kamala Harris is now vice-president elect; she represents a new partnership of bringing people together from all backgrounds. Our commentary of 5th October waxed lyrical about her progress over the past 30 years, and in due course I can see her taking the hot seat directly.

But it is that huge challenge of wealth polarisation which perpetuates racial unrest, as we spoke of on 15th June: and that must be addressed through inter-generational rebalancing.

So, at last we have a time of hope. For those feeling a sense of despair as the four horsemen of the Apocalypse appeared to bear down on us, this is a time to look forward. It will take patience and it must be inclusive, but at last the dark days of impending doom have been pushed back.

His plans for transition show how -

- these four modern 'horsemen of the Apocalypse' will be addressed as his top priorities:

plus - please refer to our commentary of 5th October