Past and present injustices make a toxic mix

“The Romans enslaved the British for 400 years. So are we due reparations from the Italians?”

Many people, including John Cleese, are struggling with historical injustices and what impact they should have on re-telling history today. Some say that the presentation of history will always be a moving feast, but I would suggest that is a cop-out.

The key issue is: does the historical event continue to be a running sore today?

In the case of the Roman Empire, the answer is clearly ‘no’. So, we can continue to celebrate Roman achievements without danger of offence. However, in the case of racial discrimination and 19th century slavery, the answer is of course ‘yes’, because the impact continues to be suffered by a very large part of our population, in both in the United States and the United Kingdom.

The root cause of this continuing injustice is economic inequality, and particularly the denial of opportunity to young black people. So, in this commentary we look at why intergenerational rebalancing is so urgently required, and how we could restructure the use of inheritance levies to provide a long-term answer.

Jenni Russell’s editorial comment in the Times last Thursday was headed ‘Fixing the wealth gap is the key to equality’. She quoted some sobering statistics from the ONS Wealth and Assets survey 2018, showing that:

Meanwhile she drew attention to the fact that:

As a consequence, jobs for black people are insecure and unreliable, leading to more risk of family breakdown with its devastating impact on the future opportunities for their children. It is of no surprise that the great majority of looked-after children and young people are from BAME backgrounds.

This week’s Motley Fool Answers, ‘Understanding the Black/White Wealth Gap in America’, directly addresses the same challenge in the US. Dr. Trevon Logan from the Department of Economics, Ohio State University, cites the average black person’s wealth as $20,000 compared to $160,000 for white people. He recommends the report ‘Umbrellas don’t make it rain’ for further study.

So, the reason why such an outbreak of black frustration has resulted in continuing mass demonstrations is not, at its core, a protest against historical mistreatment - it is the gross inequality which still exists. White people have accepted that apartheid is wrong, although apparently even Abraham Lincoln struggled with this; but we have not yet taken on board that the inevitable consequence of that conclusion is to ensure that economic integration takes place.

At Share Radio, we have been arguing for intergenerational rebalancing for years as part of our campaign for egalitarian capitalism, and this means empowering black and ethnic minority young people with financial resources and education: so that, when they reach adulthood, they will have a real chance of breaking free from the cycle of deprivation. As Ohio University’s Dr. Logan explains, education alone is not going to overcome this: he speaks of the need for progressive ‘baby bonds’ in America, which for them could include a degree of slavery reparations. 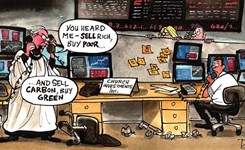 The Church Times has got the message with its lead article last week: now we need the Government to follow suit. Boris Johnson’s cabinet is well represented with BAME ministers but, like President Obama, this requires much more in terms of specific economic and educational initiatives. The news over the weekend that Boris Johnson has announced a 'cross-governmental commission' to look at all aspects of racial inequality in the UK is a step in the right direction, and this proposal will be submitted for its early consideration.

The only Chancellor of the Exchequer to introduce a real intergenerational rebalancing initiative was Gordon Brown, with the Child Trust Fund. It reached all children born between September 2002 and January 2011 (the oldest of whom reach 18 on 1 September this year), and it gave a particular boost for those from disadvantaged homes by doubling the Government contribution from £250 to £500. As a result, there are now six million young people with individual accounts with an average of £1,500; and that total of £9 billion has come a third from Government, a third from investment growth, and a third from family contributions.

Since 1987, I have argued passionately that inheritance levies - worth £5 billion per annum - should not be absorbed into current Government spending but should be used to empower children and young people from disadvantaged backgrounds. Margaret Thatcher wrote back to me sympathetically, but took no action. Gordon Brown introduced the Child Trust Fund 15 years later.

We may be economically challenged by the virus emergency, but this should not hold us back from re-introducing intergenerational rebalancing for today’s young people. There are about seven million children in families in receipt of tax credits, of whom a disproportionately high percentage are BAME.

The ‘catch up’ for those under 18 who do not currently have a Child Trust Fund would entail a one-off commitment of c. £5 billion but, in the steady state, just a quarter of current inheritance levies targeted at empowering these young people would enable accounts to be established with an initial £1,000, with £1,000 more to follow at age 7. Then, an incentivised learning programme, such as The Share Foundation’s Stepladder Plus for young people in care, should be introduced to offer the opportunity for each of these young people to earn a further £3,000 each and, in so doing, prepare themselves to be ready for a fulfilling and economically rewarding adult career.

We can break the cycle of deprivation which gives rise to these riots and protests - we just need to show the resolve to do so.

.. and it's all down to economic inequality

Dr. Trevon Logan, from the Department of Economics, Ohio State University, puts it all down to the black/white wealth gap in the US

The solution lies in ..