Share Radio, the national money and business digital radio station, has posted a threefold increase in the number of digital downloads generated by the station from April 2015 to April 2016.

The financial station dedicated to providing information on money and investment matters for people across the UK, saw website, app and Audioboom figures rocket, rising from 20,000 monthly average downloads to over 50,000 in January 2016 and 65,000 in April 2016. A further 15,000 downloads were made from the the This is Money Audioboom channel. Share Radio also saw on-demand audience figures doubling since the beginning of the year.

The figures are the latest in a series of development stories for the national station.  In February 2016, Share Radio went national. The deal with Wireless Group to take over the business channel on the new D2 digital network means Share Radio can now be heard in all the major cities and all parts in between and, importantly, on all major motorway routes.

Lee Roberts, Commercial Director at Share Radio commented: “Share Radio is a unique station in commercial radio. We are a combination of BBC Radio Four and The FT – no phone-ins and no DJs, just quality speech editorial about money and business. Like BBC speech stations, a large proportion of our audience listens on demand. The popularity of speech radio has increased over the past few years, and the biggest stars of speech radio have been in the commercial sector. More and more services are launching and TalkSport 2, TalkRadio and Share Radio now can be found nationwide on the DAB dial.

“These figures are very encouraging and show how our business is developing as both a publisher and broadcaster of high quality speech programming. We look forward to increasing our business further in the second half of this year.”

The station is the home to top financial journalists including Financial Broadcast Journalist of the Year Georgie Frost, winner at this week's 2016 Headline Money Awards, as well as Sarah Pennells and Senior Analyst & Deputy Editor, Ed Bowsher, who were both shortlisted for that same award. In addition to this, in April Share Radio received the City of London Wealth Management (COLWMA) Educational Initiative Award.

Share Radio is a national independent radio station, which sheds light on subjects including consumer issues, business, investments and economics. The radio station entertains and gives guidance, helping both to make and to save money for listeners. Share Radio broadcasts 24-7 with a team of 30 journalists live on air from 6 am to 9 pm each day, reacting to the news as it happens.

Share Radio is the UK’s first radio station dedicated to providing information on money and investment matters for people across the United Kingdom. Share Radio is a talk-based station aimed at a broad audience, everyone from consumers looking for the best deals and information through to City professionals. The station aims to demystify finance by entertaining and educating its listeners. Regular programmes include Morning Money, Investment Perspectives, Consuming Issues and The Evening Show. The station is the home to presenters and journalists including Financial Broadcast Journalist of the Year Georgie Frost at the 2016 Headline Money Awards, as well as Sarah Pennells, and Deputy Editor/Senior Analyst Ed Bowsher, who were both shortlisted for that same award. In April 2016 Share Radio received the City of London Wealth Management Educational Initiative Award, and in 2015 was nominated in the Arqiva Commercial Radio Awards for Innovation of the Year.

Share Radio broadcasts 24 hours a day, seven days a week and is available on national DAB and on broadband at www.shareradio.co.uk, having joined the new commercial D2 digital network on 29th February 2016. Listeners may need to retune to hear the shows, and can also continue to download the Share Radio App from the Apple and Android App stores or listen in to Radioplayer and Tune-In radio player Apps. 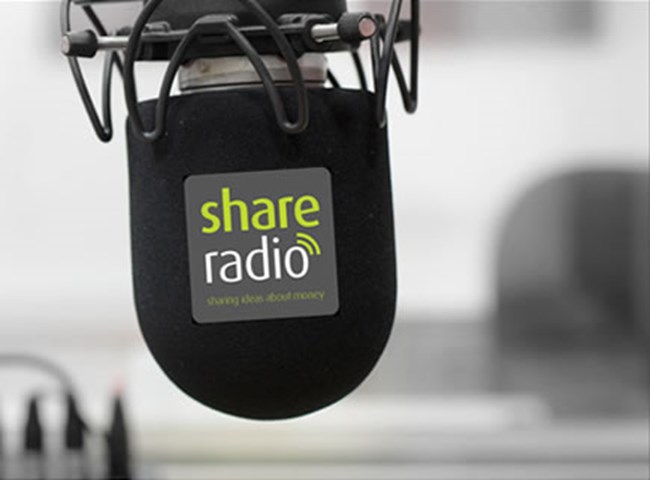