“Big Tech thinks they’re too big to be held accountable - and with gutless antitrust enforcement, they are.”

On 29 July the world’s most powerful tech chief executives - Mark Zuckerberg (Facebook), Jeff Bezos (Amazon), Tim Cook (Apple) and Sundar Pichai (Google) - were summoned to Washington to testify at the US House of Representatives antitrust committee. The central purpose of the hearings was to determine whether the companies had too much market power.

Whether it achieved that aim is debatable, as the above Twitter quote from Elizabeth Warren points out. However, our principal concern is not just their concentration of power but also their concentration of wealth: for it is the latter, combined with intensive automation, which jeopardises the entire economic progress of humanity.

So in this commentary we revisit a subject last tackled by this commentary on 15 January 2018, but from a different perspective: the capacity for big tech to remove money from circulation, thereby reducing the majority of people to subsistence income.

Last week this commentary addressed the need for inter-generational rebalancing, with an opening quote from Yanis Varoufakis and his question: ‘Why so much inequality?’. Later in his book ‘Talking to My Daughter - a brief history of capitalism’, he addresses the economic impact of deep automation at every level of society, in a chapter entitled ‘Haunted Machines’. His concern about the comprehensive replacement of human labour with robotics is clear, but he also appreciates the dichotomy presented by the inevitable march of technological progress.

There are two big questions here: the first is who controls the tech industry, and the congressmen are clear in their minds that tech power has reached such levels to allow it to hoover up competition at will. The Financial Times on 1 August reported that, since 1995, big tech companies have spent more than $200 billion buying up smaller rivals, with 32 deals greater than $1 billion.

Their resultant concentration of wealth is staggering, and hardly a day passes without some report of the deployment of excessive wealth concentration in vanity projects like space exploration. No wonder Yanis Varoufakis says: ‘Our creations - the machines installed in every factory, field, office and shop - have helped produce a great many products and have changed our lives utterly, but they have not eradicated poverty, hunger, inequality, chores or the anxiety about our future basic needs’.

There is a fundamental economic instability in this process, because machines, unlike human labour, don’t spend money. Rather, they hoover up the money circulating in the economic system at large, and they deposit it at the disposal of their super-rich masters, instead of letting employees’ weekly expenditure fuel the income for others throughout society.

Some economists have tried to address this by proposing a ‘Universal Basic Income’, but this is surely looking for the lowest common denominator: a route by which the vast majority of humanity will be left on subsistence terms while Bezos, Zuckerberg and Cook fill their palaces with gold and the sky with rockets.

The answer lies in democratising equity ownership of the tech giants - and, if their masters will not enable this voluntarily, then governments need to set the criteria by which this can be achieved. For, if the majority of humanity - who almost all use the services of big tech – were to see their working wages gradually being replaced by regular dividends from that equity ownership, we will achieve a society in which all can benefit from the massive boost in experiential wealth which automation is bringing about. 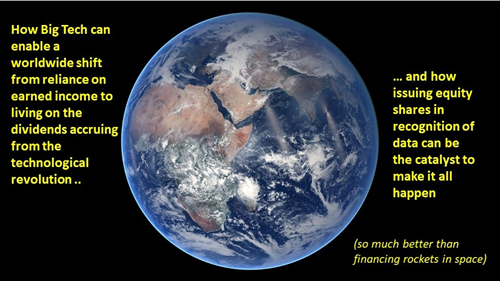 The key is to use big tech’s huge storage and harvesting of our personal data as the currency for distribution of equity shares in the big tech companies. We’re all aware that companies such as Amazon, Apple, Facebook and Google sit on the most immense store of data about us, and GDPR has done almost nothing to rein in their intrusion into our personal lives.

So, equity shares should be issued in respect of this liability that the tech giants owe to us, their customers. This will achieve two great benefits: firstly, that there will be democratic control over the way they behave (including that check on antitrust behaviour) and secondly, that the flow of dividends will replace the huge quantity of lost money in circulation that their automation is gradually sucking out of the system.

And there’s a final economic consideration to all this. The best arbiter of experiential value (as opposed to exchange value) is the individual, across the whole of society. It’s not investment institutions, it’s not governments, and it’s not a few super-rich tech moguls.  As we commented on 20 April 2020, it’s essential to grasp the economic challenge of moving away from measuring everything in GDP terms: in other words, by exchange values which are being rapidly undermined by automation.

Putting power over big tech directly in the hands of people across the world will allow them to exercise, through their voting power, how to tackle a move to a new, de-monetised quality of life, where machines are our servants, not our masters.

Our personal data is stored and harvested in huge quantities by, and for the benefit of, Big Tech ..

'Who gains from Big Data?' is a December 2017 New Economics Foundation episode for Share Radio - please click on the image above.

If this is recognised by issuing equity shares and dividends to their customer base, the benefits of the technological revolution would be shared across the world