Jeremy Corbyn’s attack on the City of London last week may have been good timing on his part in order to divert attention away from an alleged spying scandal, but it follows in a rich tradition of protest against a financial system heavy in parasitic intermediation. Six years ago the ‘Occupy’ protest movement took hold in the immediate aftermath of the 2008 financial crash, and I recall an hour long conversation with a protester in Boston, Massachusetts which concluded that the real target of their angst was excessive financial intermediation.

Yet Corbyn’s solution is equally flawed: to replace excessive financial intermediation with excessive state intermediation, re-introducing a great swathe of nationalisation. We have seen in the 1970s where that leads us: to failing services and massive industrial action, which led then to a 3-day week due to power shortages, and having to call in the International Monetary Fund.

Last Tuesday I attended Capital Economics’ Emerging Markets Forecast Forum, and there was a session devoted to China. Contrary to general opinion their conclusion was that growth will continue to fall away, the debt problem has not been resolved and, in particular, that Xi Jinping’s consolidation of power is leading to a prioritisation of state control and state intervention over economic outcomes.

In China, as firms become larger the state increasingly controls the levers of power. One chart in particular shows what’s happening as a result to the return on assets of private and state-owned firms: 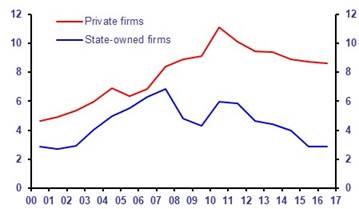 The temptation to step in and take control is enormous, whether for financial institutions or the state. To be fair, it is a basic animal instinct which has been around for millennia: here’s a seasonal Lent quote from St. Matthew - ‘Again, the devil took him to a very high mountain and showed him all the kingdoms of the world and their splendour. “All this I will give you,” he said, “if you will bow down and worship me.”’

There is a better way.

In preparation for setting up Barclayshare (now Barclays Stockbrokers) in 1986, I recall a visit to Oxford to meet a don in order to discuss our vision for popular capitalism. He said: “Ah, what you’re aiming to achieve is disintermediation.”

So what is 'Disintermediation'?

‘Disintermediation, in finance, is the withdrawal of funds from intermediary financial institutions, such as banks and savings and loan associations, to invest them directly. Generally, disintermediation is the process of removing the middleman or intermediary from future transactions.’

Sounds complicated, but it describes perfectly what needs to be done.

It’s about returning a sense of ownership and control to the people. In a true capitalist society, everyone is a capitalist - everyone has a stake. Excess financial intermediation may enable competition, innovation and price formation, but it does not invite popular support because it offers individual citizens no sense of ownership or power to influence the future.

That’s why in this commentary we have drawn attention to the dangers of excessive private equity ownership by institutions, as opposed to public markets, and to the need to harness the tech giants for the benefit of all, by encouraging them to distribute free shares to their customers.

And it’s why Corbyn’s nationalisation alternative will not work: in fact, in the ‘What Works’ table of stable growing economics, it is the worst solution of all:

At present those animal instincts for concentration of power are much in evidence, but the polls are all telling us that people feel disenfranchised and want to take back control. In a discussion on wider share ownership last week on the BBC’s ‘Bottom Line’, Gervais Williams of Miton Asset Management drew attention to the strength of individual participation in small companies, and investors’ appetite for taking more control over their investments.

This is good news, in a world where globalisation seems to favour the rich and powerful: but Government needs to take action to help it along. Hence our call for a new drive for personal share ownership, planned by a cross-departmental working group and including industry specialists who can make it happen.