The Tragedy of Imposed Solutions, the Magic of Goodwill

Imposed solutions, invented by the well-meaning and installed by the powerful, have never delivered for humanity - whether European single currencies, universal benefits, or the ‘dictatorship of the proletariat’. At the end of the day it’s all down to individuals and, as Ms Hunt says, it’s only when you take responsibility for your life that you discover how powerful you truly are.

I recall twenty years ago there was vigorous debate about the European single currency. It was only a few years after the United Kingdom had ignominiously exited the European Exchange Rate Mechanism in September 1992, with interest rates hoisted very temporarily to 15%. The continental Europeans had got it right, but Britain simply couldn’t hold the line.

At the time there were many esteemed economists saying that you couldn’t have a single currency without having a single government – a body politic - for the whole area. And now, as we watch the Euro unravel in front of our eyes, we see that they were right all along.

And so it is with all imposed solutions. Generally, they are born from the best intentions, but they are invariably spoiled by removing personal freedom. 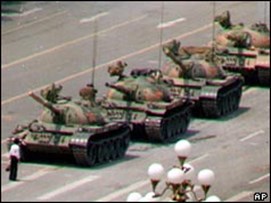 And in the 19th century Karl Marx produced a radical new way, intended to bring power to the people - but what communism introduced was dictatorship, and oppression, of the proletariat. For example, 4th June is the 29th anniversary of the Tiananmen Square massacre in China: here's the iconic picture of a single person stopping the tanks.

Time and again over the last hundred years, economic tragedy has been caused by the imposition of socialism.

The reason why, of all the -isms introduced by well-meaning people, capitalism has survived and prospered, is because it is built on personal freedom: that is a pearl of very great value, and it’s why those of us who believe in personal freedom must watch over it, and ensure that it doesn’t lose its individual character.

There are, however, several key things to watch out for in our modern day capitalist system:

But, most of all, personal freedom is assured by a society built on a strong set of values, and I would challenge anyone to find a stronger set than those of the ‘Share’ enterprises:

Let’s put these in the context of young people, because they are the world of tomorrow and we need to respect them, empower them, help them to build confidence and hope just as much - indeed still more - than our own contemporaries.

There are two specific actions underway to give young people right across the United Kingdom a better financial future. First, a determination to resolve the muddle that Child Trust Funds - one of Gordon Brown’s good ideas - have got into, before the oldest recipients reach 18 in September 2020.

Child Trust Funds were put in place for all children born between 1 September 2002 and 2 January 2011. However, although six million were set up (compared to Junior ISAs – just over one million), approximately one million are ‘addressee gone away’ - that is, lost to the young person to whom they belong. Unfortunately, children from the poorest homes are the worst affected by this ‘addressee gone away’ rate, with those in families in receipt of Child Tax Credit suffering a 33% ‘lost’ rate. We’re determined to re-link as many young people as possible to their accounts.

Second, we’re campaigning hard for a GCSE in Financial Education. It is ridiculous that so many young people go to university or work so unprepared for the daily financial challenges of life. It may be compulsory in the curriculum, but it won’t be taught properly unless it is examined properly.

And finally, the issue of financial literacy leads to some thoughts about the word ‘Goodwill’. The dictionary comes up with two definitions for ‘Goodwill’:

How interesting that these two are combined in the same English word! For the values on which the first definition is based are indeed a key reason underpinning the second, accounting definition. Both reputation and personal freedom for all rely on a friendly, helpful and co-operative approach to all we meet – in other words, ‘willing good to others’.

So what drives this whole framework of capitalism forward is not just enterprise but also a keen belief in values-based personal freedom for all, so that it can continue as the only economic system able to trump imposed solutions and the tragedies that they bring about.