The United Kingdom: a Safe Haven for the EU when the Eurozone collapses?

“[The White Paper] would deliver a principled and practical Brexit that is in our national interest, and the UK’s and the EU’s mutual interest.”

While the media circus has concentrated on the anguish of the Brexiteers and the antics of Trump’s European itinerary, we’ve been studying the White Paper on ‘The Future Relationship between the United Kingdom and the European Union’.

It’s a very comprehensive document, both methodical and meticulous, and covers the whole swathe of Government. It could not have been constructed in just a fortnight, and it therefore carries a huge amount of input from David Davis, who indeed confirmed as much yesterday in the Sunday Times, including his key point of difference with the Prime Minister.

So this week we look at Theresa May’s detailed shopping list. She may yet get away with cherry-picking what she wants and, if so, the outcome will certainly not be BRINO (BRexit In Name Only). 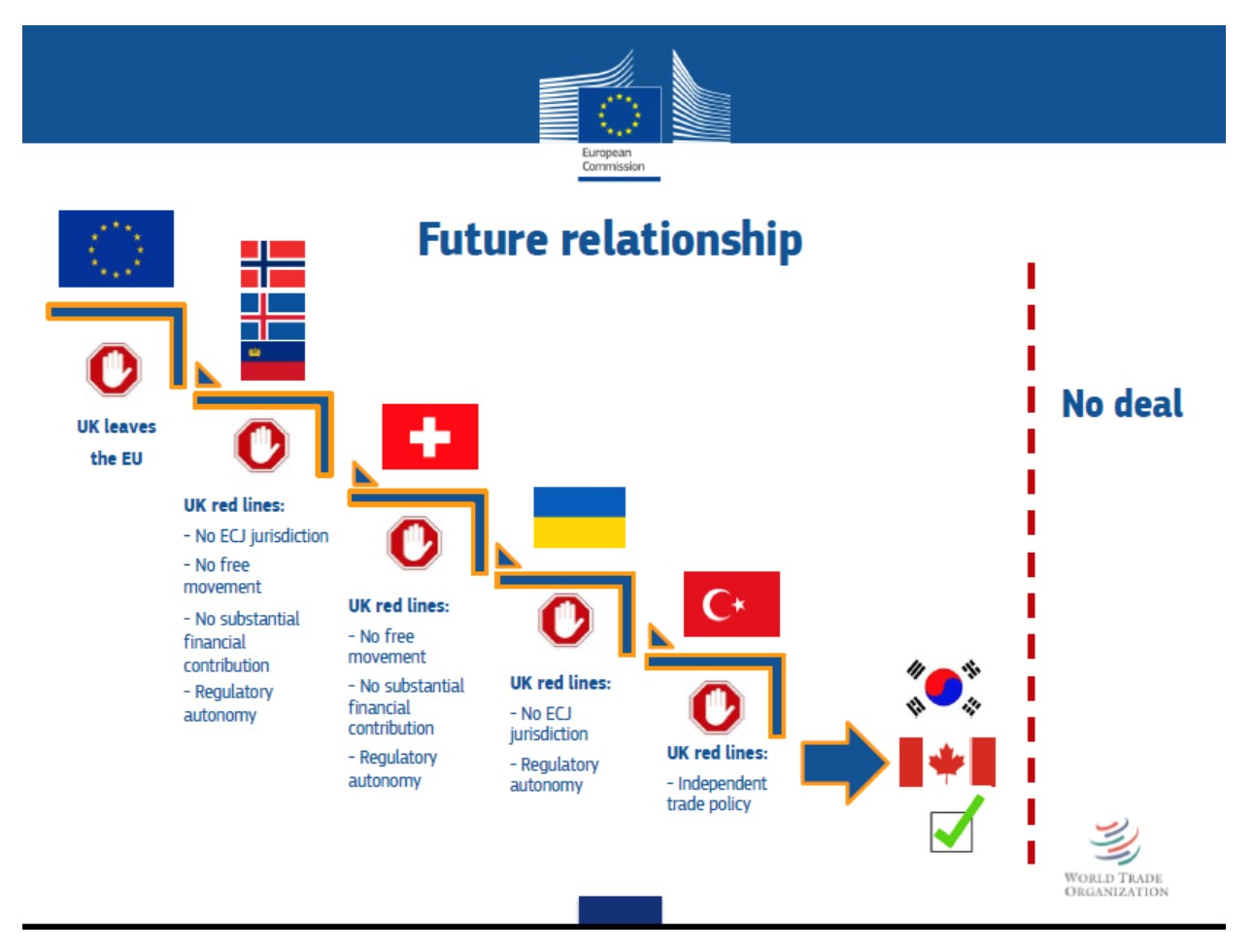 When Michel Barnier produced his infamous slide, reducing the potential for Brexit to a Canada-style free trade agreement, he made clear that cherry-picking was not one of the menu options available. However, whether it was David Davis or Theresa May who was the main architect of ‘The Future Relationship between the United Kingdom and the European Union’ , they have taken no notice of that slide: the White Paper is quite literally a detailed and comprehensive shopping list – well-articulated and well-argued.

It’s split into four sections: the economic partnership (the largest part), the security partnership, other areas of cooperation (including the fishing arrangements), and the proposed structure for UK-EU oversight.

As deduced in our commentary of 5th March from Theresa May’s Brexit speech three days earlier, the White Paper picks out the relationship which we want in order to match UK strengths in both our EU and our international relationships.

For those looking for quick reference to the key sections, here’s a handy guide:

So, in summary, I’m quite impressed by this White Paper. It bears all the hallmarks of careful Civil Service preparation, guided by good ministerial focus: which may explain why neither Liam Fox nor Michael Gove have tendered their resignations. I suspect that, as Steve Baker said, he and David Davis were ‘blind-sided’ on the critical decisions regarding the Common Rule Book and possibly the complex section about the destination of imports and potential repayment of excess duty charged.

But I would not accept that this represents EU colonisation of the UK, as Boris Johnson has suggested. In all trading agreements, there has to be some acceptance of the other side’s standards: these may otherwise be called non-tariff barriers. But it’s worth remembering that we have contributed hugely to the EU rulebook over the past 40 years, and that there is plenty of provision for divergence and flexibility in the future. Also, the risk of large scale employment losses if short-term intransigence were to cause an exodus of EU-centred business cannot be taken lightly.

There are, however, one or two tantalising hints of an approach which could be vital for both the United Kingdom and the European Union in the years ahead:

And here’s where the most interesting omission lies. There is NO mention of the Eurozone at any point in the White Paper, and that is indeed the ‘elephant in the room’, bearing in mind its precarious state following the Italian elections.

It’s my belief that, both in London and Brussels, there is a deep concern that the whole EU adventure could come crashing down as a result of the Eurozone breaking apart, as envisaged by Sir Martin Jacob 22 years ago (Commentary on 25th June).

If I’m right, there may just be a combined determination to enable the United Kingdom to become a lifeboat - a safe haven - in the future, for the chaos which would ensue as a result of such a collapse.

It may therefore be in both parties’ interests to see this deal done without too much further ground being given.