A sensible and effective way to tackle climate change

“People of conscience need to break their ties with corporations financing the injustice of climate change.”

If extreme weather events and hunger caused by severe drought trouble you, you need to know about the Transition Pathway Initiative: supported by investors with over $9 trillion worth of assets. It’s providing a way forward for tracking alignment with the transition to a global low carbon economy, thus identifying - and enabling shareholders to influence - those businesses which are unwilling to tackle climate change: the single most serious issue facing the world today.

After eight weeks of blistering UK temperatures, ending in widespread storms and flooding, we guide you through this ground-breaking investment initiative and provide a link to its latest assessment. 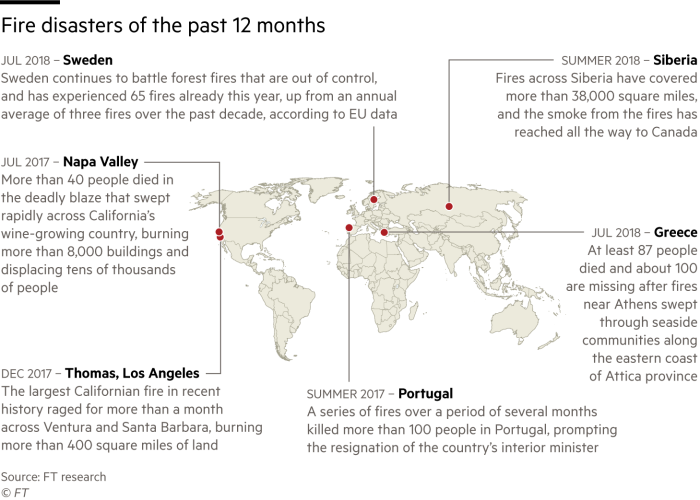 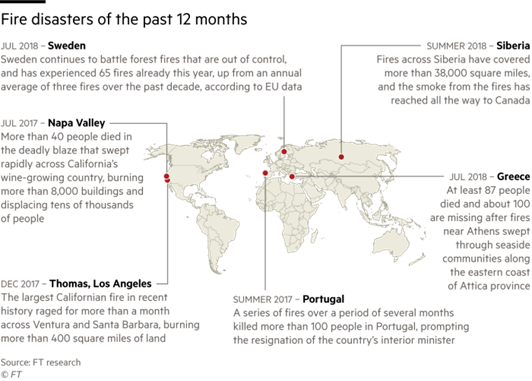 The news has been beset by extreme weather events, many culminating in wildfires. This graphic is a Financial Times global summary as at last Saturday (27th July).

Meanwhile the latest issue of National Geographic magazine reports on the massive die-back of coral in the Great Barrier Reef, due to ocean warming.

As we proceed through this century, sea levels will start to rise, threatening cities like New York with no easy way to defend themselves against flooding.

Only a fortnight ago a dramatic image showed a Greenland iceberg the size of a small mountain threatening a local village with a tsunami as huge sections calved from it.

It may therefore have appeared somewhat inept for the Government to announce last Wednesday (25th July) that they were clearing the way for fracking to begin in the United Kingdom, allowing extraction of shale gas in Lancashire.

But of course that’s one of the complications of the transition to a low, or no carbon, economy - it’s a complicated business moving away from fossil fuels and we urgently need a way of measuring business progress.

One of the largest ‘socially responsible’ investors is the Church Commissioners (of which I’m a Governor, and a member of its Assets Committee). It has a total fund worth over £8 billion, and we’re particularly concerned to find an effective way of changing the business strategies of giant fossil fuel producers. Here’s a short video explaining why it’s so important, and how the Transition Pathway Initiative can help:

Engagement as a shareholder is much more effective than disinvesting, but there has to be a limit. So the Church Commissioners said they were supportive when the Church of England’s General Synod urged that 2023 should be the final year for remaining invested in intransigent fossil fuel producers. In five years’ time a significant exodus of investment from such companies could therefore begin.

Five years is not long, and over that period there could be a major parting of the ways between responsible energy producers - who intend to comply with the Paris accord on climate change - and those cowboy operators whose investment risk rating will rise as they are increasingly seen to be clinging on to stranded assets.

Whatever Donald Trump thinks about the Paris agreement, the weight of investment money will start calling the shots from 2023 onwards. As with so much in life, politics and regulation can only set the direction of change: it is business and the economy which must deliver.

So what is the Transition Pathway Initiative, and what do its assessments say? Set up by the National Investment Bodies of the Church of England, the Environment Agency Pension Fund and the Grantham Research Institute, here’s a link to its main brochure and website, describing how it measures business progress. There are five levels against which companies are assessed:

The Transition Pathway Initiative assesses a wide range of substantial energy companies and carbon intensive producers, including fossil fuel producers and auto manufacturers. It’s a rigorous assessment process, which also shows movement between the five levels over time. In the most recent assessment earlier this month, there were seventeen improving companies compared with three moving backwards. But there’s much more to do.

Shell is a good example of the changes which have been achieved already. Over the past three years, Shell has:

As a result, this is the TPI assessment of Shell’s progress: 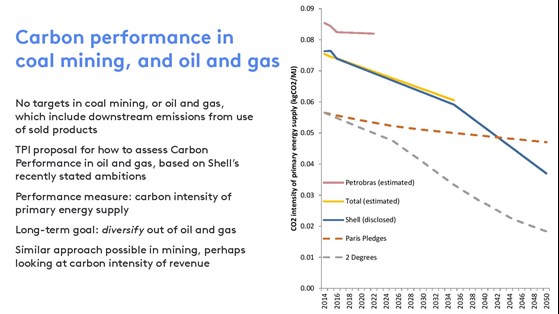 So if you care about the world we leave for our grandchildren and their grandchildren, the Transition Pathway Initiative is a vitally important tool to make real change happen. If you have investments, ask the firm you use to become a recognised supporter by signing up on the TPI website. Of course it doesn’t force their hand in terms of decisions, but it does mean that they’ll be kept up-to-date with the latest developments and research findings in order to help keep climate change in check.

Too much carbon in the atmosphere leads to ..

Greenland shakes off its iceshelf ..