Artificially Unintelligent – the challenge to employment and competition

“We are so inventive that whatever regulations are promulgated, that will not stop us from serving customers.”

For many years I have believed that ‘arrogance is the Achilles heel of politicians’, but I am beginning to wonder whether the same should be applied to tech giant moguls. The above quote appeared in a small article in last Thursday’s Times, under the headline ‘God-like Amazon faces enquiry over data on rivals’. But whether the surname is Bezos, Musk, or Zuckerberg, the challenge of that great human weakness affects all who reach such great heights.

Last Wednesday I attended the Brittelstand Symposium, a gathering of SME business leaders at Henley Business School. One of the keynote speeches (not mine!) was from Cindy Rose, CEO of Microsoft UK. She spoke on Artificial Intelligence with a really refreshing blend of opportunity and humility. What a contrast!

So here's a look at two aspects of Artificial Intelligence: its impact on employment, and how data harvesting could make a nonsense of GDPR.

‘Whoever becomes the leader in this sphere will become ruler of the world’: this is apparently Vladimir Putin’s view of Artificial Intelligence (AI). AI is punching its way through all human activity. There are deep ethical concerns about its rise, illustrated by warnings from Elon Musk about ‘Summoning the Demon’, and Stephen Hawking that ‘Advanced Artificial General Intelligence (AGI) could spell the end of the human race’. That would make us one of the shortest lived species to have inhabited the earth: but the human race seems particularly adept at devising ways of securing its own destruction, and AGI may indeed be one of these.

Of more immediate concern to people in everyday life is: how will it affect my job? After all, it is the stated objective of, for example, Mr Bezos that people should not do work that can be done by software, robots and other technology. No amount of ‘MacDonald-style’ collective employee ownership will protect from such an attack on employment, as John Lewis is demonstrating with its 99% fall in profits.

So it was particularly useful that the Economic Research Council published this analysis, drawn from a PWC projection of the impact of AI on UK jobs: 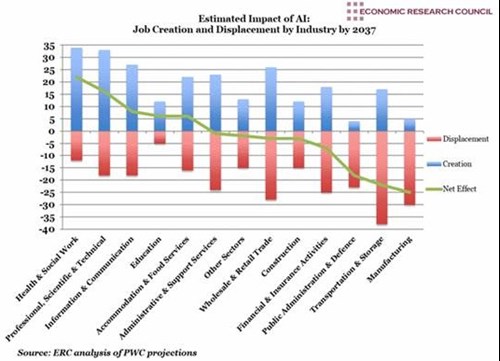 It is of course encouraging that there are many sectors where employment opportunities are likely to increase due to AI, even if the largest of these is health and social work (perhaps due the despair it is likely to cause in other sectors), but there are also many where the reverse is true: and the overall impact is expected to be negative. However there is a huge shift between sectors, and many laid off will lack the necessary skills to benefit from the jobs which AI creates. It is also likely that the earnings potential of many of the new ‘human touch’ opportunities will be considerably less than those lost to AI.

So we’re likely to see further evidence to back up the findings from the Massachusetts Institute of Technology’s 2013 review by David Rotman, and the potential substitution of Universal Basic Income cannot provide a basis for human self-fulfilment: nobody wants to be a couch potato. I recall the words of the 1960s Tom Paxton song, ‘A Job of Work to Do’:

In any case, under ‘Universal Basic Income’ where will the money come from to buy Amazon's products, under the Bezos model?

Jobs matter: and, because we live in a changing world, education matters. Ultimately it is up to people themselves to choose between being served by, or having decisions made for them by, other people or machines. At present we are intoxicated by the wonder of automation: will we return to value human service again, rather than buying online? Time will tell.

That’s an open choice: however, there are other aspects of Artificial Intelligence which are much less open: and one of these is data harvesting. It’s said that, if you receive a service for free, you’re not the customer but the product - because it has to be paid for by someone else. That’s the Zuckerberg model.

The rise in the extent of data harvesting made possible by AI is exponential. Its key attributes are the ability to perceive, to understand, and to interact; and by each of these means a more rounded picture develops of the human they are perceiving, understanding, and interacting with. Their memory is not impacted by Alzheimers’: it simply builds and expands indefinitely.

So the new GDPR rules which came into effect in May 2018 hardly touch tech giants exploiting AI. Whereas for SMEs their compliance officers trim data capture into a strict ‘need to know’ regime, Google, Apple, Facebook and Amazon forage across all your interactions with them without limit. So GDPR is itself creating an un-level playing field for those seeking to compete with these giant tech businesses.

I put this question to Cindy Rose, Microsoft’s Chief Executive, and she agreed. She replied that Microsoft is currently discussing with Government the fact that GDPR may be insufficient to deal with Artificial Intelligence.

I was impressed by the Microsoft principles for AI, which she described as:

and she spoke eloquently of transparency and accountability.

At least there’s one tech giant who understands that people must come first.

Are we letting AI drive us ..

.. to become surplus to requirement?