“Millions of disadvantaged children are at risk of losing out on money that rightfully belongs to them and would be crucial to give them a decent start in adult life.”

Gavin Oldham, quoted in The Sunday Times on 25th August

In just five days’ time, the oldest teenagers with Child Trust Funds will be 17. In a year’s time, they will be allowed to withdraw their money: on average, there is £1,500 in these accounts. Thenceforward each month for the next ten years, they’ll be 55,000 young adults who should be able to get access to their accounts, but as of today only 37,000 will be able to do so - because the other 18,000 are lost to their family, their young person.

Child Trust Funds were set up by former Chancellor Gordon Brown in order to ‘establish a savings habit among children, providing a cushion of assets as they embark on adult life, and enabling them to be confident in the management of their finances’. Six million accounts are in existence, all safely administered by account providers, but two million of these are lost to the family, to the young person, concerned - and these lost accounts are concentrated among the most disadvantaged young people with an 80% 'loss' rate. It is a social injustice, and results from shortcomings in governments of all persuasions.

So in this commentary, as we digest another set of GCSE results almost devoid of financial education, we look at The Share Foundation’s campaign to recover the Child Trust Fund, and why these accounts could be a much more effective carrier for financial education than Mathematics. 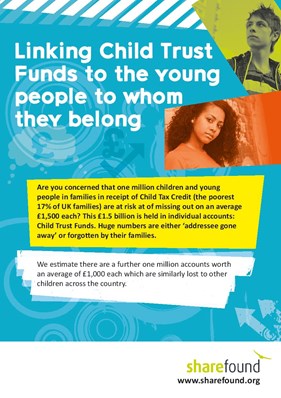 Just before the summer recess, each Member of Parliament received a leaflet from The Share Foundation called ‘Linking Child Trust Funds to the young people to whom they belong’. A flurry of responses was received from MPs, and this autumn The Share Foundation will be writing to other major children’s charities asking them to join in a nationwide campaign to wake up the Child Trust Fund.

The leaflet provides a link to a major Westminster Hall debate in March 2019, led by Helen Goodman, MP for Bishop Auckland. It carried the link for helping to find lost Child Trust Funds, and the website URL of the CTF Ambassadors scheme.

Over the weekend I was quoted in the Sunday Times describing the Child Trust Fund scheme as ‘a sleeping beauty, covered in cobwebs and forgotten by many families’, in addition to the quotation at the head of this newsletter. The Share Foundation is setting out to be the handsome prince who will wake up this potentially transformative scheme, and empower a whole generation of young people.

There are only two leading GCSEs which contribute in any way to financial education: Mathematics, taken this year by 778,858 young people (but with a financial content limited to calculation of compound interest and suchlike), and Business Studies, taken by 95,801 aspiring business leaders of the future. 59.6% of students passed the former (Grade 4/ C) or higher, 65.8% of students passed the latter.

Should we be surprised that The Money Charity discovered that ‘only one third of teachers think financial education is even somewhat effective’? [IMAGE] To be effective, we need an examination, a GCSE which can act as a focus for the subject.

There is a raft of failing GCSE examinations, while the L IBF level 2 exam in financial education, which is not recognised as a GCSE by the Joint Council for Qualifications, was taken by 30,000 students during this last year. Can you imagine how many students would take such an exam if it were available as a mainstream GCSE subject? I would suggest it would be ten times as many, more than the number taking History (278,759).

This is because people have to deal with financial matters every day of their adult lives, and young people know this.

So when Gordon Brown spoke of children being enabled to ‘be confident in the management of their finances’ as a result of experience with their Child Trust Fund, he was touching on a vital but very elusive issue, which is best met by a combination of learning and experience.

Both need urgent action: the learning, through the establishment of a Financial Awareness GCSE, the experience, by helping young people to find their Child Trust Fund and take over its control from the age of 16.

Let’s work with the new administration in Government in order to address both these needs, and Share Radio will do its best to help The Share Foundation in these endeavours.

But will aspiring Year 12 students ..

.. be able to find the money in their Child Trust Fund?

And if they missed out on financial education ..

.. it's always possible to take our Managing My Money course