Who should determine what is acceptable exploitation?

“People who exploit others come to spend an enormous amount of energy wondering about and justifying that exploitation.”

Millions of young people around the world are protesting. Over the past 250 years, we have learnt how human domination of the Earth has taken exploitation to unacceptable levels, and we now gradually coming to realise that we have to stop. As we concluded last week, our growing ability to influence the future has just not been matched by the value we place on it.

But of course, exploitation is not just about climate change. We speak of ‘Mother Earth’, but over the same 250 years we have also learnt that domination of the female side of our human species by the male also has much to answer for.

So this week we find parallels in these two glaring examples of exploitation through a piece written for a Dorset parish magazine, and we look specifically at the opportunity to resolve a current dilemma involving potential exploitation: the surrogacy consultation, which closes on 11th October. 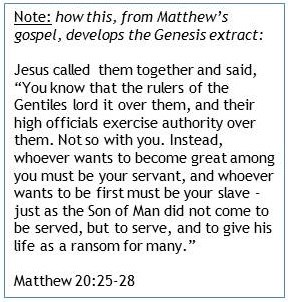 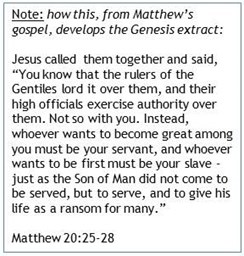 In Genesis, the first book of the Bible, we are told that mankind was given dominion over the Earth (“Be fruitful and increase in number; fill the earth and subdue it”). For millennia, empire builders, including the British, have done just that. We may have left a legacy of civilisation in many of the countries we’ve invaded, but we’ve also plundered their natural resources, and caused great human distress.

Likewise, the male side of our species has almost exclusively exercised domination over the female. We may find it extraordinary that women are only just being allowed to drive and to travel abroad by themselves in Saudi Arabia, but it’s only 100 years since women have ceased being treated as chattels in our own country.

So it’s not surprising that these two strands of exploitation should have drawn together in the eco-feminist movement, and this has been eloquently set out in a Dorset parish newsletter, by Solveig Sonet:

“Although not confined to the Christian faith, referring to Creation, to this earth, as Mother Nature, is a very common and well-established analogy. Nature is often referred to as female, and it is interesting to see the parallels between the treatments of the female in our world, and the treatment of this earth by our world.

Throughout history and still in many places today, women have been seen and bought as property, bargaining chips for good business deals. Useful vessels to secure the next generation. Used and abused, and in need of subduing, for the entertainment and profit of men. Women are often thought of as meek and mild, inferior, obedient, and in need of male dominance, for their own protection. And today in the UK; although much progress has been won; even in our churches, one need not look too far to find exclusive language used in liturgies and hymns. The language of men or mankind to refer to humankind, or God solely referred to as Father, Lord, and King. Leaving the female experience of God erased from language, hidden, and silenced.

And if the female is not to be heard, not to be equal to the male. If the female is to be dominated, to be used and discarded, for the profit of the male; it is perhaps unsurprising to see Mother Nature being perceived in a similar light. Nature may be seen as something which sole purpose is to provide humanity with what it needs. To use and abuse it carelessly, for our own profit, our own entertainment. To tame it and keep it under control, regardless of harm it may do. We destroy entire forests for the sake of cheap furniture, harvesting palm oil, and giving us cheap beef. We pollute our water, for the sake of cheap and fast fashion. We fill the oceans with plastics, for the sake of commodity. With our oil and gas industry we are killing an immeasurable amount of wildlife. With our non-renewable energy industries, we are releasing huge damaging amounts of carbon in our atmosphere.

As if to present us with a specific challenge on what exploitation really means, the UK and Scottish Law Commissions are currently undertaking a significant consultation on surrogacy. The aim is to encourage surrogacy in the UK by relaxing restrictions on its commercial promotion. There are clearly, of course, concerns that such freedoms could be abused: but once again it raises the issue of gender exploitation, and questions as to who should be entitled to opine and legislate thereon.

Giving birth by surrogacy is something which can only be undertaken by women; it is physically not possible for men, at any point in their lives. So why should men’s opinion carry weight in a consultation on surrogacy? And why should male Members of Parliament be entitled to vote on any subsequent legislation?

Is it not reasonable that only those who are capable of being exploited should determine what is an acceptable level of exploitation?

Which brings us back to the question of climate change. As the World Meteorological Organization reports today, this will bear down particularly hard on today’s children and young people, whereas us older folk will be long gone. It is these young people who are out in the streets, protesting at our evident reluctance for political change: Donald Trump’s withdrawal from the Paris Agreement on Climate Change being a prime example. It is absolutely correct that these young people should steer policy for the future, even if it does imply a substantial economic cost in changing direction at this time.

Of course it has to be said that ‘one person, one vote’ democracy is a huge advance from the oligarchies and dictatorships of history: but it is not necessarily the end state in achieving a stable system of governance. Indeed it was Winston Churchill who said “No one pretends that democracy is perfect or all-wise. Indeed it has been said that democracy is the worst form of Government except for all those other forms that have been tried from time to time”.

In seeking to refine it, and particularly in areas which involve exploitation, perhaps it is worth exploring a form which gives proper weight to those who will be most affected by that exploitation.

- as they have most to lose, should they not have the greatest say?

.. why should men opine, or legislate, on a subject which essentially involves women only?

In seeking to refine democracy, particularly in areas which involve exploitation, should we give more weight to those most affected?