“I wonder if the ancient sin of charging interest - known as riba in the Islamic tradition and usury in extreme form - can still be considered a sin when rates turn negative?”

It’s crunch week for Brexit. While the UK and EU continue to fret over final arrangements for Irish customs, stock markets weigh up the challenges and opportunities ahead. Investment professionals are watching carefully, and I particularly enjoyed attending the Miton Investment Forum last Tuesday, with some key themes which feature in today’s commentary.

In our world of geo-political instability, Brexit and climate change, these challenges and opportunities are coming to a head at much the same time: with serious problems developing for Europe, some surprising developments in energy generation in the US, and a re-awakening of interest in the UK post-Brexit.

So this week we pick out some of their key themes to help chart the choppy waters ahead:

The Eurozone: increasingly resembling a black hole for liquidity

Just as hurricanes and typhoons suck in a terrifying vortex of weather, like a black hole in space from which there is no escape, so the Eurozone is increasingly challenging economic growth and liquidity. In a set of four slides entitled “Reasons to be fearful”, Miton’s European Opportunities fund manager Carlos Moreno set out four slides showing the pressure on the single currency area: 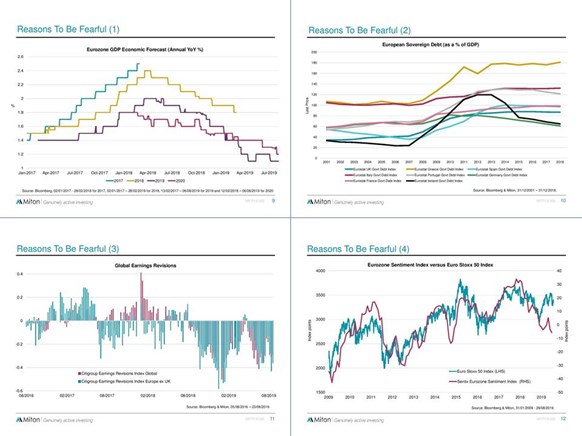 In a later presentation, US fund manager Hugh Grieves described how the Eurozone is sucking out liquidity, as the yield curves in Germany and Switzerland are now showing negative returns for periods of 30 years and 50 years respectively - hence the interesting moral dilemma in our quotation above: 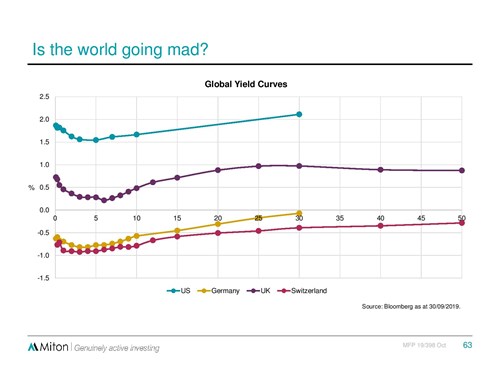 Meanwhile, in his chart showing how global growth is slowing, it is European countries which have been under most pressure over the past few months: 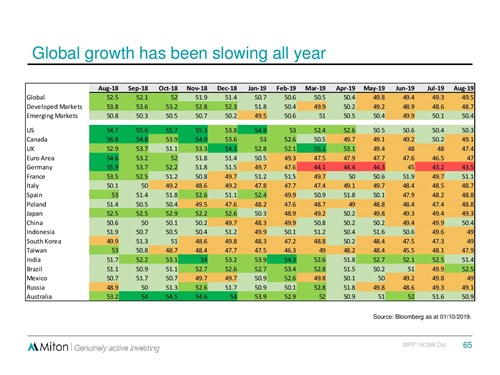 How long can the Eurozone be allowed to suck the economic life out of Europe? We may indeed be approaching a crunch point in 2020.

All good reasons why the EU should get Brexit done, before their own economic storm breaks.

However, there are still more serious problems on their doorstep, with increasing geopolitical pressure from both the Middle East and Russia. For example, the new alliance between the Syrian Government and the Kurds following Trump’s ill-considered withdrawal looks set to prompt Turkey’s Erdogan to carry out his threat to direct 2-3 million Syrian refugees into south-east Europe instead: a major headache for Brussels. The EU Commission doesn’t need to be diverted any more by Brexit.

However, while Trump struggles with international geo-politics, throwing his Republican colleagues into despair, those same congressmen and senators are just getting on with business in their own American back yards. Energy generation is one such example. 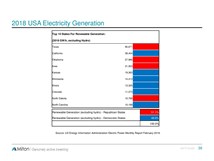 Of course this is directly attributable to the economics, as the cost of renewable generation has dropped below that of coal and nuclear: 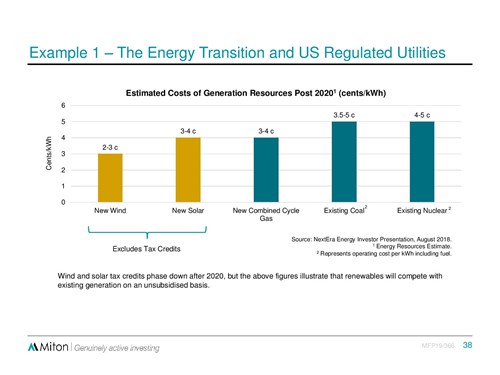 So perhaps Extinction Rebellion should publicise this very good news, for both business and the planet, as clearly more energy suppliers need to get the message and become more profitable. Clearly the Republicans have got it, even if their leader doesn’t seem to have heard yet.

Closer to home, the markets are at last sensing the Brexit endgame, three and a half years after the referendum. There was a distinct firming in the £sterling exchange rate at the end of last week and, in their ‘Global Capital Confidence’ barometer, accountants Ernst and Young conclude that “Despite continued uncertainty stemming from its intention to leave the European Union, the UK climbs into the number one spot of top investment destinations, for the first time in the survey’s 10 year history”.

This may have something to do with how far UK valuations have diverged from those of the United States, as shown in this Free Cash Flow Yield Spread chart, comparing the S&P 500 with the FTSE 100: 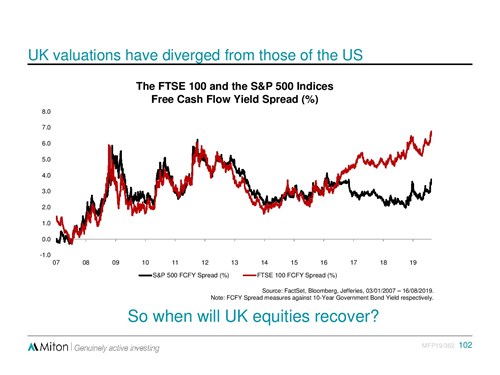 While he is certainly not optimistic on the future of the Eurozone, Gervais Williams (who gave Miton’s concluding presentation) brought the forum to a more positive close for UK prospects. In another of his slides, he illustrated how, over the long term (63 years), annualised real returns in the stock market far outperform those of Treasury bills, Long Gilts and even house prices: something to which we also draw attention in the investment episode of the ‘Managing My Money’ course: 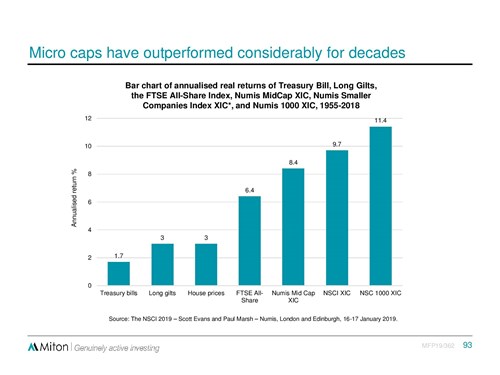 Listeners should, however, be aware that presentations such as these are designed for investment professionals: and don’t forget that higher returns on shares are normally accompanied by higher risk - shares can, and do, go down as well as up!

So are stock markets approaching a watershed? All the evidence appears to point that way.