Norway’s lesson for the UK – and it’s not about Brexit!

“We could have saved sixpence. We have saved fivepence. [pause] But at what cost?”

Of course, our respective populations are very different: only 5.3 million live in Norway, compared to 66.4 million in the United Kingdom. But, as economists know only too well, we are not a nation of savers. 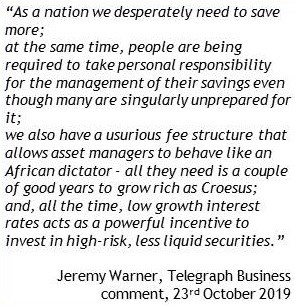 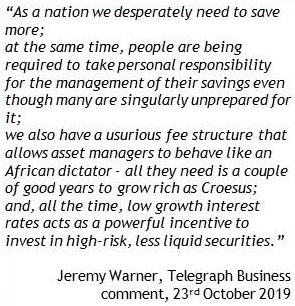 Jeremy Warner summarises our chronic savings challenge succinctly in a Telegraph Business comment piece on 23rd October 2019. This commentary looks at the key factors to which he draws attention, and how we might prepare better for the future.

The London Investor Show last Friday was buzzing with activity, and there’s no shortage of investment opportunities at present, as this commentary highlighted a fortnight ago. The problem is that there’s just not enough UK investors, and savers in cash deposits are thoroughly disillusioned after ten years of rock bottom interest rates.

In these conditions, the UK savings ratio just bumps along the bottom, although it’s never been that much to write home about. So Jeremy Warner is absolutely right to say that as a nation we desperately need to save more.

A century of Victorian paternalism resulted in a deeply embedded system of ‘defined benefit’ pension schemes or ‘occupational pensions’, which meant that employers took the risk of market movement in order to guarantee incomes in retirement. The same paternalism, mixed with a strong dash of socialist sauce, resulted in the post-war Labour government’s welfare state system.

The sad fact is that pushing the risk and obligation onto business and the state hasn’t worked in a world where competitive pressures and technological disruption demand big changes in business models. Companies weighed down with occupational pension responsibilities do not survive, and their pensioners lose out.

Meanwhile, government has recognised its challenge by increasing state pension age and introducing the auto-enrolment system, requiring businesses to introduce a basic ‘defined contribution’ system for all employees.

All this means that, as Jeremy Warner says, people have to take more responsibility for managing their own savings for the future.

The problem is, however, that the education system has made virtually no provision for teaching people how to do this. It’s done the minimum necessary to make financial education compulsory in schools: there is no financial awareness GCSE, and only 25% of those leaving school claim to have had any worthwhile financial education.

Meanwhile Gordon Brown’s major initiative in providing life skills and some resources to a whole generation, the Child Trust Fund, is languishing in obscurity: it will only deliver its promise if the scheme is given the prominence it deserves, and if two million accounts lost to the most disadvantaged young people are properly connected. The Share Foundation has a major programme to achieve this over the coming years.

But of course it doesn’t end with financial awareness. The investment industry has also got to learn to serve the whole country, and not just segments selected by wealth and activity. The largest investment firms still number their customer bases in hundreds of thousands, but there are 66 million of us living in the United Kingdom. Jeremy Warner’s comments were prompted by the Woodford debacle, and it is the case that very few firms operate a flat fee structure which incentivises them to build the scale of their customer base, rather than living the high life on ad valorem % rates. But these few firms - such as The Share Centre - do exist, and they will play a major part in transforming the savings and investment landscape in the future.

Finally, low interest rates deter savings: yes, they do - but it is possible to find good yields on very cautious investments such as infrastructure and utilities. We need to present these opportunities in a simpler way, and not tie savers down by the same blunt interest rates set by Central Banks to control inflation. It will involve a better understanding of risk, and a regulator better equipped to help people understand what ‘caveat emptor’ means: but it can be done.

So, when Parliament finally allows Chancellor Sajid Javid to set out his Budget (postponed from 6th November), let’s hope some of these major impediments to saving are removed, and that Britain can become not just a nation of shopkeepers but also a nation of savers and investors.

But while Norway has built a massive Sovereign Wealth Fund ..

.. the UK has built a massive public sector debt burden

So we need to learn how to save in the UK ..

.. in both the public sector and the personal sector

We also need to learn to invest in sustainable energy, not fossil fuels