Calling all 16 year-olds* - it’s time to find your money!

“Remember that as a teenager you are at the last stage in your life when you will be happy to hear that the phone is for you.”

We have waxed lyrical, in this commentary, about the Child Trust Fund over the past two years: the extraordinary scheme launched by Chancellor Gordon Brown and Treasury Minister Ruth Kelly in 2002, which resulted in six million children and young people having individual accounts now worth a total of over £9 billion. For the past nine years, the scheme has been like a ‘sleeping beauty’: now it’s time to wake it up! That’s because the oldest recipients are now in their 18th year, and are able to access their money in September 2020.

However the challenge is that two million of these accounts are lost to the young people concerned and their families, and the rate of loss is greatest for the most disadvantaged. So registered charity The Share Foundation has negotiated and developed a new simplified search facility, with the co-operation of HM Revenue & Customs, and the new system went live on Friday, 22nd November.

A young person is allowed to take control of their account from their 16th birthday. There’s already 250,000 lost accounts for young people aged 16 and 17, so in this commentary we invite you to help us contact them. it will be a ten year campaign to reach children with birth dates up to 2nd January 2011, and The Share Foundation’s ambition is to link most, if not all, of the missing two million accounts. Please help us! You'll find the links below, and in the right-hand column.

None of the politicians vying for election on 12th December has yet mentioned the Child Trust Fund. Of course, its originators would search hard to find a natural home in politics today: the Labour Party has no time for individual ownership or the Blair/Brown years. Meanwhile the Child Trust Fund suffers from ‘not invented here’ syndrome in the Conservative party, not getting a mention in their manifesto although it presents a major opportunity for egalitarian capitalism. And the Liberal party were the assassins of the scheme at the start of the 2010 coalition government.

But the accounts exist - all six million of them. They have been looked after safely by c. 59 account providers, 11 of whom administer the huge number of ‘HMRC Allocated’ accounts - 1.7 million. These are the accounts which were opened centrally because the child’s parent(s) had taken no action by their first birthday, and it’s among these accounts, concentrated on the poorest families, that there is the greatest rate of loss: c. 85%.

On Wednesday 20th November The Share Foundation discussed its new simplified search plan with these ‘HMRC-Allocated’ account providers and, as a result, it’s now ready to go. It will start focusing on young people in care of Child Trust Fund age with a responsible adult, but it will also publicise the new plan broadly, seeking to build its team of CTF Ambassadors. No charges will be applied for this ambitious undertaking.

If you know of any way to contact 16 year-olds in large numbers, please do everything you can to help. There’s three key websites:

The Share Foundation and Share Radio believe that all young people have the same spread of potential to achieve great things in life, whatever their circumstances. However, in order to provide them with the opportunity to realise that potential, they need some resources and life skills to get started. That’s exactly where the Child Trust Fund comes in, and it’s why The Share Foundation is so determined to make the scheme fly, now that its recipients are approaching adulthood. 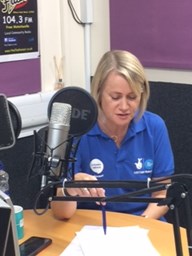 A few weeks ago, I was interviewed by Fiona Ross in a radio programme which sets out this great challenge: please do listen to it via our Share Radio podcast. It’s only 20 minutes long, but hopefully you’ll find it more uplifting than two hours of electioneering on Question Time!

It's time to find your money!