Mandatory universal lockdown is 37x too blunt a weapon

“Old age is the most unexpected of all things that happen to a man.”

COVID-19 statistics from Brazil and the United States show that the global pandemic is a long way from being beaten. But in the United Kingdom and the European Union much progress has been made in flattening the peak of infections, and the death rate is still gradually subsiding.

But we are a long way from being free of this scourge. The promised vaccine seems to be as far off as ever, and we anxiously watch the ‘R’ rate as beaches, protests, shopping and work bring people together again in close proximity.

The stark fact remains, however, that COVID-19 is an old people’s disease - on average, people over 65 are 37 times more likely to die than those of working age or younger - and we cannot inflict permanent lockdown damage on the young and middle-aged. Older folk must learn to take their own precautions.

So in this commentary we take due note of the latest ONS statistics of COVID-19 fatalities by age, and support the major economic initiatives being taken to get the economy moving.

The Office for National Statistics shows that, up to 5 June 2020 and out of the 47,387 COVID-19 related deaths in England and Wales, there were:

This means that people aged 65 and over are nearly 37 times more likely to die than those aged under 65; and that those aged 85 and over are a staggering 127 times more likely to die from COVID-19 than those of ‘working age’ or younger, assuming an equal spread of infection. Meanwhile, in the Radio 4 programme ‘More or Less’ last week, one of the statisticians interviewed quoted the risk of dying from COVID-19 as ‘doubling with every seven years of age’.

This is indeed an old person’s disease, and the blunt instrument of lockdown hurts the young and those of working age the most. It is just not fair, as we remarked in our commentary two weeks ago. 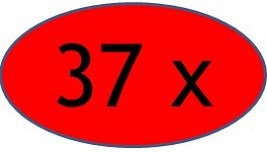 So in future, now that we have hopefully made proper provision for those in care homes or incapable of making their own decisions, old people must take responsibility for looking after their own safety from infection; and young people, and those of working age, must respect their decisions to stay apart, whether family, friends, or casual encounters. Perhaps we should introduce a 37x badge to remind them to keep their distance.

This would mean that we can leave universal mandatory lockdown behind us as an instrument of Government policy, and concentrate on getting the country back to work, and young people back to their studies.

The news that the National Debt is now larger than the Gross Domestic Product, and that the Bank of England is releasing £100 billion in quantitative easing to drive liquidity into the economy, are clear signs that ‘enough is enough’ so far as lockdown is concerned.

In particular, the Government needs to get shovel-ready infrastructure projects moving across the United Kingdom, and there was an encouraging article in last Friday’s Telegraph business to suggest that this is happening. This reported that 48 projects have been identified by Glenigan, the construction industry analyst, as having been granted planning permission already or in the process of tendering.

Almost one third of these projects feature renewable energy, which ticks two very important boxes: firstly, they tackle climate change, and secondly, they will spread across the country - although there is a need to identify more projects in the ‘red wall’ constituencies of the north-east.

The vital purpose is to get people working again across the country, and outdoor, large-scale infrastructure projects are really useful in this respect. Andrew Carter, chief executive of the ‘Centre for Cities’ think tank, drew particular attention to the opportunities to retrain unemployed people as the furlough scheme is phased out.

The Bank of England’s largesse in announcing £100 billion quantitative easing will certainly help finance this - although, in due course, they will also need to cancel their £500 billion holding of National Debt, as we argued in our commentary on 8 June.

Unless there is a breakthrough in vaccine development following its current testing in Brazil, there will almost certainly be a second spike in the virus – let’s hope it is not as bad as with Spanish flu in 1920. However, it cannot be met with another mandatory universal lockdown. There’s an old saying about being ‘cunning as serpents, innocent as doves’, and we must employ it to learn how to embrace herd immunity for those of working age and younger, while protecting - and self-protecting - the 65s and over.

So we need to stay on our guard ..

However it's not hard to deduce from ONS statistics ..

.. to get the economy moving again.

.. must keep their distance better than this.

So we don't end up here again.