Please write it off, Mr Bailey!

Last Friday the Telegraph business section reported the IFS forecast for UK public sector net borrowing for these next two years: £500 billion. It matches almost precisely our recent estimates of the Bank of England’s holding of government debt as a result of the huge COVID19 measures. 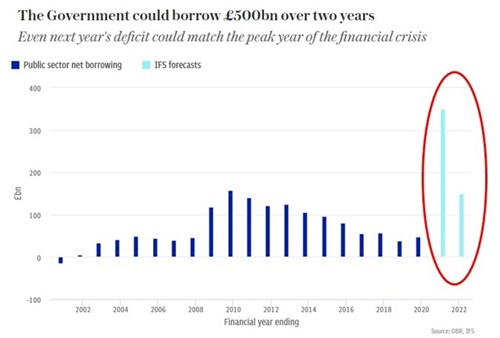 The same article quoted Andrew Bailey, current Bank Governor, speaking to the Treasury Select Committee: “We could only do what we are doing at the moment, in terms of the pace, scale and aggression of the Bank’s action, if we were credibly independent.”

So in this commentary, as surveys and comments abound as to whether the deficit should be clawed back from taxation on income or wealth, we return to our conviction that the huge deflationary dividend from the technological revolution will allow Andrew Bailey to write off the whole £500 billion without risking an inflationary surge; and, in so doing, to set example to our European (ECB) and US (Fed) counterparts.

In 2015 I wrote the following for ‘The Shareholder’, the investment magazine for The Share Centre (whose merger with interactive investor is now complete):

‘When people look back at this economic era in, say, 50 years’ time, what currently feels like a series of shocks and surprises will be seen as a continuous unfolding story.  It may start with the 20th century construct of the welfare state post 1945, borne with democratic socialism, but the impact of technology will be seen as the most pervasive, and ultimately benign, influence.

‘There is an old world, where Governments run up huge debts to assuage the demand for social welfare and where banks over-indulge in leverage, and a new world, where technology strips out monetary value and delivers huge scalability in supply.  These two worlds still do not understand each other, but as the shocks and surprises explode around us they are being forced to do so.  It would help if economists could lead rather than follow, but that is difficult for a discipline whose key measure is money itself.

‘The latest shocks and surprises are the immense fall in the oil price and the emerging turmoil in and around the Eurozone.  When supply exceeds demand, prices fall: and falling prices are de riguer in the 21st century.  With energy, it’s the new technologies of fracking and alternative sources which have introduced huge supply scalability and have broken the system of OPEC price-fixing.  With communication, media and consumer products it’s digital technology which delivers so much for free (or at a fraction of the old cost), and electronic delivery of supply is virtually unlimited.

‘So prices have fallen and will fall, and with them interest rates.’

Indeed they have, such that Andrew Bailey himself has advised financial sector businesses to ensure that they are operationally prepared to cope with negative interest rates.

So now is the time to draw down the technology dividend, that benign influence of which I wrote in 2015, because its defeat of inflation will allow us to cancel out the whole, massive economic impact of COVID19.

Of course, it easy to see how HM Treasury would welcome this outcome: they know that the sheer scale of recovering from debt of this magnitude with either income or wealth taxation would be devastating for years to come. They know that we must do what we can to get money circulating in the economy again: hence the ‘build, build, build’, ‘eat out to help out’ and ‘go out and spend’ messages.

But it’s not their decision to write off the Bank’s holdings: it’s the decision of the Monetary Policy Committee. And the MPC’s role is to target an inflation rate of 2%: very challenging, in a world of negative interest rates and a society which is becoming increasingly comfortable with online service and eliminating unnecessary travel and centralised business premises.

The Bank needs a new weapon to tackle a new economic phenomenon: this is not a re-run of the 1930s. Debt cancellation provides that weapon, and thank goodness we kept clear of membership of the Eurozone to be able to deliver it. Let’s hope Andrew Bailey is holding a series of discussions with Christine Lagarde and Jerome Powell, his counterparts in the EU and US, to go for concerted action.

.. is in the hot seat as Governor of the Bank of England, with the power to write off the Bank's holdings of COVID19 Government Debt - using the great deflationary 'dividend' from technology to lift the burden from future generations.

It may be quiet in the heart of the City outside the Bank, but there's plenty of activity within