Economical with the truth

“It contains a misleading impression, not a lie. It was being economical with the truth.”

‘Russians spread fake news over Oxford virus vaccine’ was The Times front page headline last Friday. It is indeed fake news, intended to undermine confidence in the Astra Zeneca roll-out which is so vital to restoring our economic – and physical - health.

The Russians are, of course, not alone in manufacturing fake news. The BBC is running a whole series, ‘The Trump Show’, in the run-up to the US presidential election, detailing multiple fake news events over the past four years. The latest example is the grotesque contrast between Mr Trump’s claims for his own near-immortality and the tragic death toll in the United States, now nearly a quarter of a million people.

So, in this commentary we look at the international statistics for Covid-19, and consider the balance of honesty and incompetence in their reporting.

Readers will be aware that we generally refer to Worldometers when reporting statistics for Covid-19.

One of the most extraordinary charts is that for China, where it all started: 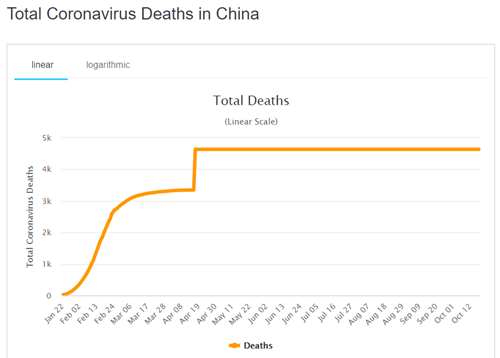 There’s no footnote saying that China has withdrawn from submitting statistics - the record just shows that infections are practically zero, and that just two people have died from the virus since April. Do you believe this?

For those who haven’t heard The Bigger Picture published on 8th October, I would also recommend listening to the last few minutes of the programme, where Professor Tim Evans suggests that the promotion of national lockdowns may be a conscious Chinese strategy to weaken the West.

The death rate in the Americas and Europe is, in contrast, laid out for all to see and, as we reported two weeks ago, it makes tragic reading. This is the current state of the 10 countries with over one million population and the highest death rates: 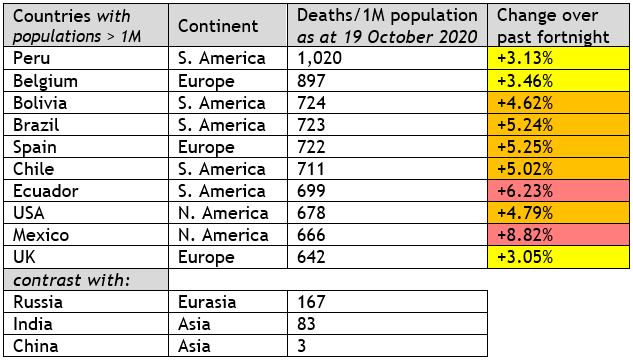 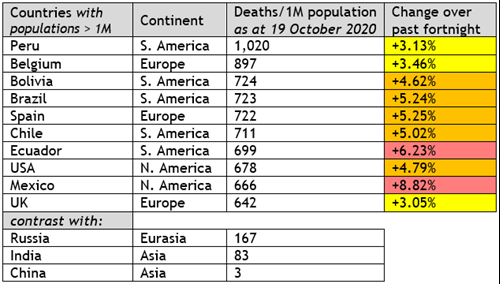 While several of these countries would no doubt prefer to hide such a tale of national disaster, there is no attempt to disguise the figures.

Meanwhile several Asian countries have clearly lost control of their reporting: there is probably no intention to hold back information in India, for example, which is reporting just 83 deaths per million population, but media reports of the ongoing catastrophe there are wholly at odds with their reported statistics.

The BBC has done well to run the ‘More or Less’ statistics program with Tim Harford, which helps to unravel what’s really going on within the UK.

There is an underlying question of morality involved in deliberately manufacturing fake news. It is easy to see, however, that when governments employ dishonesty it doesn’t take long for it to filter through to their citizens.

And, of course, there’s the big issue of Trump’s fake news. Here’s the man who was quick to hold a Bible in front of a chapel following the ‘Black Lives Matter’ riots, and who claims God’s blessing on his Covid-19 recovery – but who doesn’t blink at generating false information when it suits his ambitions.

The truth is, of course, that we are all implicated in the trail of dishonesty. That’s why we need leaders with a strong and well-disciplined sense of conscience: hopefully, there’ll be a sea-change in that context on the other side of the US presidential election.

Meanwhile, don’t believe Russian scare stories about the vaccine! If our western economies are to get back on their feet, we must break free of chronic viral lockdown: and the only way that can be achieved is by widespread adoption of the vaccine, once it becomes available.

Democracy may be, as Churchill said, ‘the worst form of Government except all those other forms that have been tried from time to time’, but it does also apply a continuing discipline on those in power to stay as honest as possible.

In some cases national reporting of Covid-19 statistics strains credibility ..

.. in others it demonstrates a loss of control

Is this really China's experience with Covid-19?

If so, can we hear how they achieved this extraordinary suppression of the virus, so that other countries can learn from it? Or perhaps they prefer to see the rest of the world in lockdown?