“Pattern of the world’s salvation, God and human side by side.

Creed or colour, race or nation, no more should the world divide:

The vaccine has arrived not a moment too soon. Even as its clearance by regulators was announced, once mighty high street names were collapsing into the hands of administrators and liquidators. 2021 may see the silver lining to the black clouds of 2020, but we still have a steep recovery mountain to climb.

But there are some really inspiring things happening at present beyond the extraordinarily fast Covid-19 vaccine development, which itself could pave the way for some great breakthroughs against endemic diseases. The two which caught my eye over the past week were the mariners in the Vendee Globe race, and Simon Baron-Cohen’s new book ‘ The Pattern Seekers’, with his radical new understanding of autism.

So in this commentary, as we look forward to a rather different, probably quieter Christmas with perhaps more time to consider where we find our inspiration, we look beyond the current challenges to physical and financial health to what makes humanity so special.

At Christmas the word Emmanuel – ‘God with us’ - is really important, and you may find this YouTube track by Andy Flannagan inspiring, particularly if you live alone. The Bible tells us that humans are made in the image of God, and it is a fact that something extraordinary happened in the evolution journey about 100,000 years ago when Homo Sapiens first appeared. Until then, the cycle of animal life and death was marked only by evolutionary change: since then, human progress has been exponential.

In my view, there are three characteristics that make it such: courage, ingenuity, and inter-generational learning.

The latter explains how each generation stands on the shoulders of those who come before them: they may not always have been giants, but that store of knowledge has become a growing stepping-stone for each new generation since the cave painters. It is now travelling very fast - as long, that is, as we continue to enjoy stable electricity to drive our amazing technology.

The middle characteristic, ingenuity, has been highlighted by Simon Baron-Cohen’s amazing insight into autism in his new book, ‘The Pattern Seekers’. He has shown that, far from being a disability, this characteristic of seeking out with deep concentration the ‘what-if’ challenges of everyday life may have been the driving force behind human mental evolution.

We all dwell in the spectrum between systemic thinkers and empathy with others. The latter is, of course, really important for a civilised society, and it makes the second great commandment, to love our neighbour as ourselves, so much easier - because it comes naturally for people with empathy.

But don’t for one moment think that those who seek the pattern of God’s technology and apply a real focus on their findings are to be criticised because empathy is not their strongest suite. Far from it - it’s their excitement and fascination with the solving challenges which has propelled humanity into the future. Autism may be difficult to understand, but it is also a gift which should be appreciated: The findings from Simon Baron-Cohen’s huge survey, that the proportion of autistic people amongst scientists and technologists is significantly higher than others, proves the point.

Then there’s courage - and right at the moment you can follow one of the most amazing examples of courage day by day in the Vendee Globe non-stop, single-handed round the world sailing race. 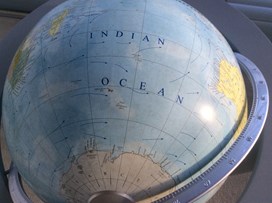 These mariners literally take their life in their hands as they battle with mountainous sea conditions: storm force winds and waves heights of over six metres - that’s the height of an average two-storey house. The tracking website allows you to follow their endeavours a by day - the leaders are currently well into the southern Indian Ocean, one of the most dangerous in the world.

There have already been a number who have been forced to drop out including Kevin Escoffier, whose boat literally broke in half plunging into a gigantic wave. He had just a few seconds to message for help before it sank, leaving him for 11 hours in a life raft at the mercy of the storm before a fellow competitor rescued him.

You may say that taking part in such an expedition as this borders on insanity, not courage - but it is this kind of determination that has propelled us continuously for the past 100,000 years.

So, we should celebrate those who do push the boundaries, both of our mind and our physical endeavours, and our focus on passing on what we learn, which leaves each generation better placed than the one before.

All good reasons why we should welcome Emmanuel this Christmas, to help steer us through our current troubles towards a brighter 2021.