“Four hostile newspapers are more to be feared than a thousand bayonets.”

Hats off to the Norwegian Nobel Prize committee for awarding this year’s peace prize to two courageous journalists who have not allowed themselves to be cowed into submission. Dmitry Muratov and Maria Ressa, from Russia and the Philippines respectively, have stood their ground in the face of authoritarian regimes, and the awards are well deserved indeed.

There are many great initiatives which have originated in Norway and, for a country which shares its northern border with Russia, their selection is a sign that they also will not be bullied: although it's interesting to note the political balance they have struck, by choosing a winner from nations representing each end of the political spectrum.

So in this commentary we look for these rare checks on authoritarian regimes, another form of excess intermediation, and ask how they can be encouraged.

It's not hard to see a general consolidation of authoritarian behaviour in the wake of the pandemic while nations struggled to recover from economic turmoil, as those with power often seek to deploy it mercilessly.

Hence Vladimir Putin's undisguised attempt to exert power over Western Europe and the Ukraine by throttling the supply of gas; meanwhile, China flexes its muscles towards Taiwan. Western democracies, still shocked by the chaotic withdrawal from Afghanistan, are having to work overtime to assess these macro-political threats.

Meanwhile in so many of those western democracies the state is getting larger. Even successful businesses are feeling the squeeze as governments exercise their reluctance to let the market do its work.

It's for all these reasons that the free press is a key monitor of threats to individual freedom. It's a complicated business, though: for example, the imposition of compulsory vaccination in the United States is meeting much opposition - is it justified? Infection and death rates have been much higher there over recent months, and it's hard to argue against a significantly higher level of protection. 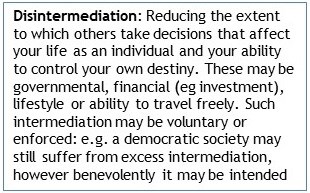 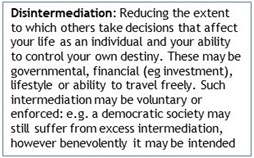 Individual freedom must be exercised with individual responsibility: that's why it must be accompanied by a fundamental respect for others in order to ensure a balance of selflessness and self-interest. These things are not easy to weigh against each other: like the individual conscience, it's a matter of trying to draw a careful line between what's right and what's wrong.

At the heart of these questions is that, so far as humanly possible, they should rest with the individual to decide, not the state. However well-meaning a politician is, they – like us - are all fallible. Hence the importance of press freedom; although it often struggles to present issues itself, when the chips are down it can be relied on to tell truth to power.

We've argued that the yardstick by which the move to a more egalitarian form of capitalism should be measured is disintermediation, and both in business and government that needs to be kept in front of mind at all times. In the United Kingdom, levelling up is a key government policy - there's even a minister with that title. But it’s not just a matter of pouring public money into different parts of the country; it's also about individual empowerment.

That's why education needs to be a key partner of the free press, and it's why I thoroughly welcome the appointment of Nadhim Zahawi as the new Secretary of State for Education. In the Saturday interview in The Times, it's reported that Boris Johnson has set three priorities for him: to help level up the country, to recover from coronavirus, and early years’ education.

So, after his considerable success in managing the deployment of vaccines, it's encouraging that Zahawi has taken over the hot seat at Education.

There are many parts of the world where this appreciation of individual freedom and empowerment is not so evident, however. In the final resort, press freedom is vitally needed to keep a check on tyrants. So congratulations to Berit Reiss-Andersen and her colleagues on the Nobel Prize committee for showing their support for what is, in some countries, an incredibly difficult task.

Hats off to the Nobel Peace Prize Committee ..

.. was awarded jointly to Maria Ressa and Dmitry Andreyevich Muratov "for their efforts to safeguard freedom of expression, which is a precondition for democracy and lasting peace."