“Stir up, O Lord, the wills of your faithful people; that they, plenteously bringing forth the fruit of good works, may by you be plenteously rewarded; through Jesus Christ our Lord. Amen”

Collect for the Sunday next before Advent

The quotation above is the prayer for the Sunday next before Advent – yesterday. Often used as an invitation to start preparing the Christmas pudding, it's the starting point in the run up to Christmas/New Year celebrations. In commercial terms, ‘Black Friday’ will be with us this week, and the media is already full of supply-demand stories. Judging by the crowds in Cambridge last Saturday they’re right to do so.

We intend to focus on logical Christianity next Monday, as Advent gets underway. In this commentary, it's better to stir up a discussion of how the economy, and the Bank of England, is coping with the inflationary surge, and the ebb and flow of the virus.

The Economic Research Council provides a good, long-term and objective perspective on the issue of interest rates and inflation. The chart below sets out the pattern of CPI and Bank rate changes since 1989, and it's easy to see how their correlation has been almost absent since the financial crisis in 2008: 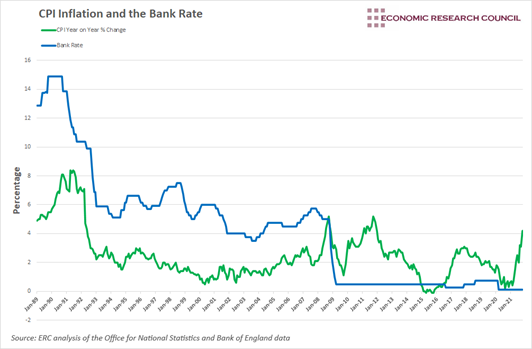 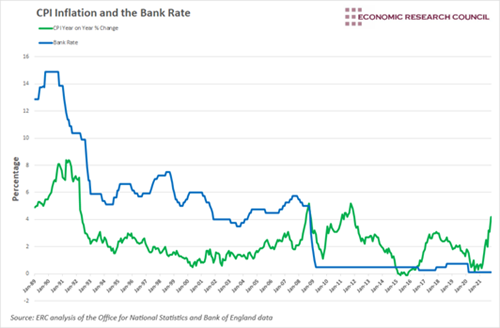 The ERC’s conclusion is that when inflation is driven by demand-side factors, the Bank of England reacts quickly to drive it down with higher interest rates. However, they are much more reluctant to react to cost-push inflation. And in interviews last week, Governor Andrew Bailey confirmed that they are watching wage increases closely to detect significant movement which would indicate a shift from supply-side to demand-side inflation.

Three weeks ago, we drew the contrast between the 1970s energy price inflation and today's surge in oil and gas prices - and it is quite a contrast. There are many reasons why translation into soaring wage increases is unlikely: the absence of union pressure, the technological revolution and, of course, the continuing virus emergency.

Indeed, the media has been full of news of lockdowns causing huge protests and surging COVID-19 rates across Europe, and it's by no means certain that we'll see a continued strong economic recovery within our EU trading partners.

In contrast, the ‘herd immunity’ strategy does seem to be working here in the United Kingdom: vaccination and booster rates are enabling a strong extent of artificial immunity, and anti-vax infections do not currently appear to be overwhelming the NHS - that being the principle yardstick for assessing the need for ‘Plan B’.

The Office for National Statistics published an interesting COVID-19 age analysis last week, showing how infections, hospital admissions and deaths are all moving towards younger cohorts - particularly concerning is the rising death rates for those aged 45 – 64:

So there remains a need for caution, in particular the wearing of face masks in confined, public places - please note, Boris Johnson; but we don't anticipate new lockdowns spoiling UK Christmas festivities.

How might this impact inflation? The chart below sets out the monthly increases in CPI over the past year, and it’s doubtful whether the recent surge in cost-push inflation will work its way into excessive wage rate increases during the winter months. Interest rates will no doubt nudge higher, but increases will probably be restrained. 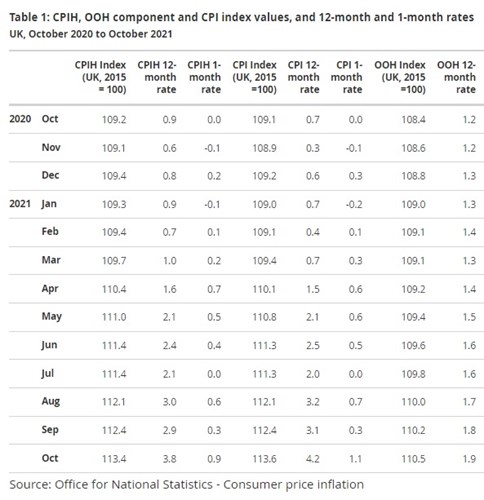 So, I hope we can look forward with hope and opportunity to carry out the ‘Stir-up Sunday’ prayer. Of course, it's not about self-indulgence: it's about bringing forth the fruits of good works - and that means loving our neighbours as ourselves (those who are least likely to be our neighbours, as the story of the Good Samaritan explains). There will be lots of opportunity to do that over the next few weeks, as Trussell Trust Chief Executive Emma Revie explained in her report on food bank demand. As in the tale of Good King Wenceslas, those good works lead to enjoyment for all.

.. inflation does a runner, but will interest rates follow?

'Stir up Sunday' is the traditional start for Christmas in the kitchen ..

.. have you made your Christmas pudding yet?