The sky's the limit!

“As school was coming to an end I thought - hold on, if I'm going to do something crazy this is the perfect time to do it. I have nothing planned - zero responsibilities. I could do whatever I wanted to do.”

Zara Rutherford, round the world pilot

I was preparing to write this commentary on the dangers faced by the unvaccinated as the virus moves into being just a part of normal life, when I caught sight of a remarkable story about 19-year old Zara Rutherford in Saturday's Times. Today she completes an astonishing gap-year flight around the world in a single-engine microlight aircraft. 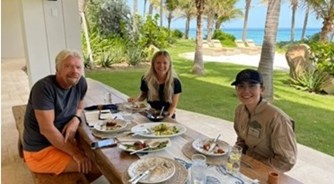 The more you get into the article, the more remarkable it is - she doesn't yet have the qualifications to fly by night, and her aircraft is unable to fly through cloud due to the risk of ice building up on its wings. She landed at the Space X headquarters in California to drop off her CV, mixed with the jumbo jets flying into and out of New York’s JFK airport, and lunched with the Bransons on Necker Island, Her website sets out the details of her journey, and includes full video interviews from Nome, Alaska (including this picture) and Riyadh.

While the rest of us are despairing of politicians, high-profile court cases, and trying to make ends meet as we emerge from the ravages of Covid-19, Zara Rutherford invites us to lift our eyes above the horizon and look for the opportunities that life presents. So in this commentary we salute the courage of young people determined to achieve their potential to do extraordinary things.

Having just watched ‘Around the world in 80 days’, a BBC serial starring David Tennant, I must admit to a tinge of envy when I read about Zara Rutherford's journey. I learned to fly single-engine aircraft at Oxford Airport at the age of 23, and I know the exhilaration - and sense of intense challenge - from that moment when the instructor steps out of the aircraft for the first time, and all of a sudden you're 500 feet up, on your own: no-one but you can get that plane down again safely.

I have also planned a virtual ‘around the world’ journey - which I know I will never make - travelling on land and sea using the shortest sea crossings. As Zara Rutherford explains, the world is full of challenges, both natural and geo-political; it is an astonishing achievement to actually circumnavigate it, particularly in a light aircraft.

There are over 800,000 19 year-olds in the United Kingdom, and many are experiencing tough times coping with the impact of the virus on their higher education. That's why many have chosen to take a gap year and to enjoy building their experience of the world, seeing things and meeting people which they would be unlikely to do later.

Finance is a challenge for many families who would wish their young to have these gap year experiences. There are plenty of opportunities to take on casual work at present to earn the money, but it can take quite a while to build up the necessary funds at minimum wage levels.

So, that's another reason why Child Trust Fund money comes at such an important time. After nearly twenty years of investment growth on top of the Government’s initial payments of £250 (or £500 for low-income families) the average account for an 18-19 year-old is worth well over £1000. The challenge is that, for the majority of young adults, they don't know anything about the existence of this account.

So far there are over half a million 18-19 year-olds across the United Kingdom who have not claimed their money, worth a total of over £0.75 billion. Just at the time when they could really use these funds to take advantage of the opportunities of early adulthood, that money risks heading towards dormancy.

That's why The Share Foundation is working so hard to connect young people with their accounts and, in 2022, we're asking anyone in a position to speak with 18-19 year-olds (born in the United Kingdom from 1st September 2002) to use the videos and working script below in order to let them know how to find their money:

If you can help us to get the word out, please consider becoming a CTF Ambassador; or, to find out more, please contact The Share Foundation on 01296-310400.

Being the daughter of two pilots, Zara Rutherford had a major opportunity to set out on a flying career: she got her licence to fly when she was just 17. For other people, there are so many other things to do - there's no shortage of opportunities.

Due to my early interest in flying, I was particularly interested to read Antoine de Ste. Exupery’s book ‘Wind, Sand and Stars’ in my early 20s: as a pilot between the two world wars, many of his experiences would resonate with Zara Rutherford. However it’s the epilogue of that book that provides a striking example of what it means to become aware of the huge opportunities for young people but, at the same time, the risk of seeing those opportunities squashed by inheriting the cycle of deprivation within which so many have spent their early years. It’s been the concluding paragraphs of that epilogue which have shaped much of my working life.

And that's why inter-generational rebalancing is such a key part of our quest for egalitarian capitalism; we're determined to see it happen.

Her microlight Shark aircraft has a cruise speed of 160 mph ..

.. and no night or in-cloud flying

Key points of her journey ..