How institutionalising risk could impoverish Britain

“You can’t dither when an opportunity comes along, you must just grab it”

The quotation above is from an 82-year-old grandmother, who in 2018 drove her 20 year-old Toyota 9,000 miles from Cape Town to London: up the eastern flank of Africa to Cairo, across into mainland Europe, and on to London. At an age when people are increasingly shuffled into long-term care, she weighed up the risks - and went for it.

Individuals who are prepared to take risk are absolutely essential, not only for ensuring a real quality of life but also for our economic progress. Unfortunately, this seems to have passed Messrs. Corbyn and McDonnell by. So this week we ask: ‘are risk-takers welcome here? Are those standing for election on 12th December encouraging them, or are they threatening to drive them overseas?’

Individual freedom is all about making decisions for your future, and a willingness to take risk in the interest of achieving returns is fundamental to being in control of one’s life. As we wrote on 14th May last year, political, economic and religious power and paternalism are always seeking to intermediate on our behalf in order to remove our individuality, but economic progress and self-confidence relies on setting the individual free.

Nowhere is this so graphically clear as in fostering business entrepreneurship. Many think that the rewards which encourage entrepreneurs are just monetary, but they are usually much wider than that. However, those who put their savings and livelihood at risk in order to achieve a greater vision certainly deserve fiscal encouragement, and that’s why taxation of capital gains is lower than that of straight income. It’s a recognition by the State of the risk premium which people have undertaken in investing, and the value that brings for the whole community.

Corbyn/McDonnell may be displaying a stunning degree of naïvety and illiteracy in the broad sweep of their ridiculous proposals for taxation, borrowing and spending, but surely their proposal to tax capital gains at the same level as income, including the abolition of the threshold at which CGT applies, is the most stupid of all their fiscal ideas. This is because entrepreneurs and financiers will simply go elsewhere and, instead of raising £80 billion from the ‘super-rich’, there would simply be a huge black hole in government finances: to be financed either by borrowing still more, or taxing the ‘many’ – heavily.

An aptitude for risk-taking is something to be fostered, not to be hounded out of the country. And it should be an integral part of education, so that a proper ability to assess risk and reward is encouraged as young people approach adulthood: including a deep understanding of the old adage ‘time spent in reconnaissance is rarely wasted’. 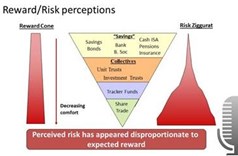 Too often, public understanding of risk is perceived as a ziggurat: things are seen as either having no risk at all or an infinite level of risk. Nowhere has this been more evident than in financial matters, where a bank deposit was seen as totally unassailable until the 2008 financial crash, whereas a direct investment in shares was often compared to putting money on a horse race - notwithstanding irrefutable evidence of long-term returns far exceeding those of government bonds. The recent Woodford asset management debacle has shown that open-ended funds are not, after all, the closest thing to a bank deposit.

That’s why young people should be encouraged not only to find but also to take control of their Child Trust Funds, as we encouraged last week. And instead of saddling university graduates with £50,000 of debt, we should be encouraging them to be the entrepreneurs of the future - and this means learning, both in theory and in practice, about risk and opportunity assessment.

We cannot leave it to octogenarians like Julia Albu to be the only people willing to take risk; we must foster and develop a ‘can-do’ attitude across all generations. Perhaps, when we have done so, we will see generational political affiliations change, and young people understanding that egalitarian capitalism, which needs to embrace individual risk and reward, is the only way to bring about a better world for all.