‘Get Brexit Done’ shows why the best outcomes are based on a clear resolve, not fear

“Nothing great has ever been achieved except by those who dared believe something inside them was superior to circumstances.”

While I am not a supporter of bell-ringing, Big Ben bonging, or any other kind of triumphalism to celebrate Brexit day on Friday, it is absolutely in order to congratulate Boris Johnson and his team on their achievement in completing the EU withdrawal process last week. He has shown resolve and determination in the face of fear and confusion in order to see us through this difficult period, and we should thank him for that.

All the economic indicators are now bearing out the logic of the United Kingdom’s 2016 decision. Business confidence in the UK is riding high, while the EU continues to suffer serious under-performance.

So in this commentary we look at some of those indicators as the Government sets about the next task: delivering a trade deal with the EU by the end of 2020. 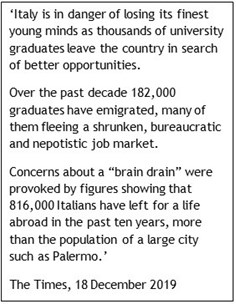 Squeezed in between the General Election commotion and Christmas, there was a very revealing article in the Times on 18th December with the headline: ‘Italy suffering brain drain as 800,000 seek fortunes abroad’. As the quotation in our panel shows, the endemic problem of EU under-performance is becoming a major structural threat to economic stability.

Particularly concerning is the impact on young people: more than 28% of Italians aged 30–34 are not in education, employment or training, compared to 13% in the United Kingdom. Alessandro Rosina, a University demographer in Milan, said: “For many, you either stay here and have no future, or leave”. More than 133,000 have come to the United Kingdom over the past decade, and half a million Italians now call London home.

In contrast, last Thursday’s Times business section reported that UK manufacturers had declared themselves more bullish about the future than at any time over the past six years; there is now a positive balance of optimism of +23%, compared to the negative balance of -44% last October. Optimism among manufacturers is the highest since April 2014.

Meanwhile, a PwC report published last week forecasts that the UK’s economy will outperform the Eurozone in the two years after Brexit, with the UK being the fourth most important nation for business growth plans behind the United States, China and Germany; and last Monday Roger Bootle of Capital Economics drew attention to Angela Merkel’s acceptance of that situation and, to some degree, her welcome for it.

This commentary has spoken on several occasions of the economic dysfunctionality of imposing currency union in the absence of political union, and this lies at the heart of EU under-performance. Had the European Union stayed in the shape which we voted for in the mid-1970s, I have no doubt that it would now be a great economic success, there would be no forced migration due to youth unemployment, and the UK would not have voted to leave in 2016.

I’m told that the reason why Jacques Delors pushed so hard for currency union was the French fear of German strength following the East-West re-unification. That may well be the case, but it shows the devastating consequences which can follow from decisions driven by fear. Much better to have a positive outgoing approach to the future, looking for opportunities for all to join in success.

And that lies at the heart of our quest for egalitarian capitalism, which we’ve also written about at length. It’s about both inter-generational re-balancing and enabling all to share in the benefits of the free market, not only by receiving the proceeds of growth but also participating in making that growth possible. That’s why, for example, we waxed lyrical last week about Investment Clubs, and it’s why the UK’s strength in the digital revolution, and fintech in particular, is so encouraging. For example, last week it was really good to hear about a new initiative called ‘Primary Bid’ which enables individuals across the United Kingdom to join in subscribing for shares in new businesses when they first join the London Stock Exchange.

I am sure that Boris’s team are watching developments like these carefully, as they know it will help to bring the country together. This is a team that have achieved an extraordinary turn-around for British prospects over the past six months, and we should welcome that. The team may sometimes appear unconventional in its approach, but it is united and positive. I was therefore not surprised to see this quote from a friend of Dominic Cummings in the FT Weekend Magazine on 18th January: “He [Cummings] thought people were wrong not to take Boris seriously - he thought he had an extra gear” - how right he has proved!

Much has been achieved, and much is still to come

Thanks, Boris .. got there at last!

Jacques Delors - was one of the key architects of the Eurozone driven by fear?