Looking for the Silver Lining

“A week is a long time in politics.”

Former Prime Minister Harold Wilson’s quote that ‘a week is a long time in politics’ has now been amplified across us all. Who would have anticipated the sheer speed of the lock-down measures that have been introduced over the past week, but few would dispute the wisdom of so doing. It’s either this, the biggest pre-emptive action in peacetime, or losing over half a million people in the United Kingdom, seventy million worldwide.

In these circumstances, all our other great endeavours seem to have become somewhat eclipsed as all the stops are pulled out. But whether they be economic growth post Brexit, climate change or inter-generational rebalancing of wealth and opportunity, these challenges won’t go away – we just need to multi-task and work at them from home, while we defeat the virus. And defeat it we will: first, as we start testing for those who have built up immunity and then, by reaching for the all-important vaccine.

Of course, the great anticipator is the stock-market which by a combination of forecasting and sentiment points to future prospects. So in this commentary, we consider the challenge for investors as they look for silver linings.

And early indications are that markets on both sides of the Atlantic are feeling for the bottom. The fact that central banks across the world - including now the European Central Bank (did they read our commentary last week?) - have acted in concert to support massive fiscal support, is highly significant.

All major developed countries are now looking to underpin time-limited suspension of economic activity, so that business can restart without large-scale disruption when it’s all over. This is a major contrast with the 1930's Great Depression, when the long-term consequences were devastating.

So now the key priority is not allowing the NHS to become overloaded, and we’ve received the encouraging news from Matt Hancock, Health Secretary, that a test is now in production to confirm whether individuals have built up antibody immunity to the virus. This is critically important for getting people out of lock-down and back into work.

We are also witnessing a competent, well-coordinated Government here in the United Kingdom, listening closely to scientific advice and taking action swiftly to plan ahead. There seems to be little justification for the rather alarming drop in £ Sterling last week, and confidence is gradually starting to re-emerge in the financial markets.

Trading activity has certainly been very high, and it is not at all one-way. Personal investors have been very much in evidence; financial services is one business sector not in a state of suspension, and the fact that many people are consigned to their home computers gives them the time and opportunity to research the best way forward.

As readers of this commentary will be aware, we are also strong advocates of investment clubs in order to help build confidence in stockmarket participation. When we put forward Budget proposals to HM Treasury in January for an Investment Club ISA, we envisaged them forming in pubs and clubs throughout the United Kingdom.

Forget that now: we are all social distancing. But the solution is video-conferencing via technology such as Zoom - this week Steve Caplin looks closely at the alternative suppliers. So, get in touch with friends who would value your company in sharing investing experience, take out the basic ‘Pro’ subscription with Zoom or such-like, and open an investment club account with The Share Centre. With two thousand investment clubs already using its services, The Share Centre knows how to make it a great experience.

But investment clubs are not the only way to fill those long days and weeks of isolation. Take a look at the needs of the children and young people in your wider family, so many of whom have now said goodbye to school until after the summer holidays. 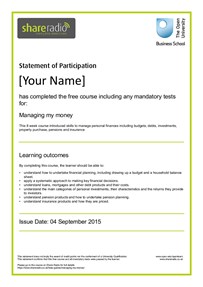 This is the time to get them up to speed with handling their finances - and that’s where Share Radio comes in. We have a really comprehensive sixteen-episode course called ‘Managing My Money’, designed by the Open University, and made really entertaining by former Share Radio presenters Glen Goodman and Annie Weston. Course completion is recognised with a certificate that most employers should welcome, and which will demonstrate that they’ve made best use of their time during these difficult times.

It even has a special provision for incentivisation, which I warmly recommend. The young person can enter the email address of a third-party referee - e.g. grandparent - who will be notified of progress as each pair of episodes is completed. So, by rewarding progress at £10 for each of the eight stages and an additional bonus of £20 for course completion, the young person can earn £100 from you for their effort! 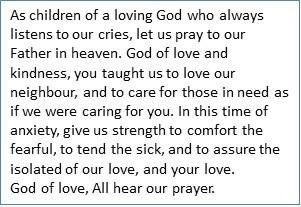 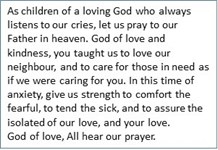 Of course, there is much else to do in these hours of self-isolation: listen to Share Radio and Share Music, form or join a local neighbourhood support group, or write your memoirs. And, for those cut off from their local church, the Church of England has taken the initiative in providing live/video streamed services, and there’s a geographical breakdown available through ‘A Church Near You’.

We will get through this difficult time and, by that point, we will have built up a strong extent of proven immunity to the virus. So - hang on in there, and be of good heart.

Things to do while isolated

Try our suggestions for some productive ways to fill the days and weeks of quarantine ahead.

.. in the first virtual service from the Church of England, celebrating Mothering Sunday.