Capitalism must retain its public appeal

“Normally speaking, it may be said that the forces of a capitalist society, if left unchecked, tend to make the rich richer and the poor poorer and thus increase the gap between them.” Jawaharlal Nehru

“History suggests that capitalism is a necessary condition for political freedom. Clearly it is not a sufficient condition for it.” Milton Friedman

At the tail end of the BBC’s VE 75th anniversary coverage on Friday, we were reminded of the shock landslide victory for the Labour Party after WW2. How could the electorate show so little gratitude and appreciation for Winston Churchill and his colleagues, in embracing the opposition’s socialist ideology?

This should be a stark warning to business leaders, whose attitude to the needs of their employees and customers often appears exclusive, insensitive and elitist.

If ‘we’re all in it together’ is to mean anything, then directors must check those forces of our capitalist society in order to align employment conditions and re-financing so as to allow all to benefit from the recovery. So in this commentary, while people are asked to stay alert to the continuing risk of the virus, we look at how capitalism must stay alert to the risk of losing its popular appeal.

Capitalism is an extraordinarily effective system for delivering economic growth, improving the standard of living and keeping business on the front foot. Competition ensures survival of the fittest, and the market ensures that progress is maintained, clearing away those that have failed and pushing forward those that succeed.

But it has two really serious flaws - both of which are made worse by the passage of time. Firstly, there is an insidious process of institutional intermediation, which distances people from any sense of ownership of the great engines of production, distribution and exchange which drive the economy. Secondly, that very phrase ‘survival of the fittest’ means that the rich get richer, leaving the bulk of people behind. In particular, there is no system of inter-generational re-balancing to ensure that every new adult, whatever their background, has access to the resources and life skills necessary to enable them to achieve their potential and take full advantage of the opportunities which capitalism offers.

My focus today is on the first of these flaws, and the phrase ‘a sense of ownership’ is critical in this regard. Equity shares are the best surrogate we have for human enterprise: ownership is the way to link the rewards of enterprise to the effort and commitment put in to achieve its success. One of the best ways to prove that motivational impact is to study businesses which provide genuine employee share ownership, whose outperformance is demonstrable.

If the population is to remain committed to capitalism, it must feel the benefits of involvement in it. If their commitment is lost, as in 1945, the path to socialist intermediation soon looks welcoming - bringing with it nationalisation and state control. So, it is incumbent on all those who make capitalism tick to make that ‘sense of ownership’ come alive.

Equity share ownership results from investment in both secondary and primary markets (both new issues and re-financings). If people are restricted to solely the former, their proportion of ownership becomes significantly diluted over time. They also lose out on some of the best pricing opportunities for purchasing stock. And their place is taken increasingly by the rich and powerful until they reach the point where they say, through democratic choice, ‘up with this we will not put’. And the pendulum swings hard away from capitalism once again.

That’s why, when well-known companies are pushing themselves forward in order to re-finance, we must enable access to primary markets for personal investors. We must make that sense of ownership come alive, and by using technology we can do that very easily these days.

And we must be vigilant not to allow elitist attitudes to grow and foster among the rich and powerful. We must encourage employee and customer share ownership, rolling out ownership across the population, and especially at this time, while people are re-evaluating their whole sense of purpose. Proper attention must also be given to employee working conditions: for example, it is not acceptable for Amazon Web Services to lose one of their vice-presidents in protest against treatment of their warehouse staff employees (Telegraph Business, Tuesday 5th May).

Meanwhile it’s not difficult to sympathise with Barack Obama’s description of the US handling of the pandemic as ‘an absolute chaotic disaster’. How can the world’s most powerful nation which carries the torch for capitalism world-wide allow its unemployment rate to soar to 15% in just two months? 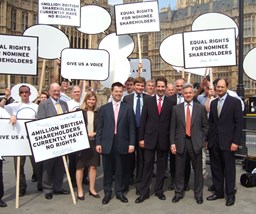 Apart from the investment benefits, personal shareholding also enables ordinary people to hold those in positions of power to account: a vital feature of shareowner democracy, where rights were significantly improved following this 2006 campaign. As any personal investor who has attended a company meeting will be aware, company directors are generally keen to take note of their concerns, notwithstanding the relatively small-scale of their individual holdings. So, on issues from climate change to employee health and safety, or from board remuneration to social discrimination, the joining of public concerns into company policies via their personal investors is all part of the benefits which arise from that ‘sense of ownership’.

So, let’s not see people forgotten as business pushes its way out of the crisis: now is the time for inclusion, not exclusion.

The Bigger Picture: How will the UK be ranked in its response to the pandemic?

The Bigger Picture considers how the UK will be ranked in its virus response: an interesting question bearing in mind that the Office for National Statistics are now providing us with what is arguably the most accurate fatality statistics in the world. If you consider that the fatality to infection rate is fairly reliably in the 0.5% to 0.8% range, that implies that our true number of infections is over four million, or over 6% of the population – roughly eight times the reported figure.