What next for Bezos?

Will I regret missing the beginning of the Internet? Yes.”

Whatever you think of Amazon and its control over the online retail market (47% in the US, 30% in the UK), we have to give due credit to Jeff Bezos for his amazing achievement. Twenty-five years ago, he was selling books out of his garage in Seattle: now he's vying with Elon Musk to be the world's richest person.

It is an example of entrepreneurship which should inspire young people bursting with attitude and ingenuity, and we're going to need lots of them to recover from the pandemic.

So in this commentary, as Bezos sets out his plans to move a step away from day-to-day control, we ask if this is a prime example of getting out at the top, and how Amazon might evolve over the coming years. 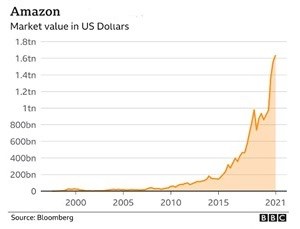 The market value chart for Amazon is just stunning, showing a total value of over $1.6 trillion  - that's larger than the GDP of all but the top ten countries in the world:

But, as they say, every dog has his day: and it may be that Jeff Bezos realises that the increasing calls for anti-trust legislation, and the determination of the new Biden-Harris administration to take action, means that the days of exponential growth are over for Amazon.

There's also the major question of how to fire up local economic activity in the wake of the pandemic. High streets were already feeling the pressure from Amazon before the virus emergency, but the past year has really turned that screw. The contribution of online sales to employment is fairly modest - Amazon employs just 33,000 people in the UK - so we need to think creatively about how to get high streets moving again.

Amazon's net profits in 2020 doubled to $21 billion on global sales of $386 billion. The United Kingdom is one of its most successful regions outside the United States, yet the company paid tax of £293m in the UK in 2020, covering business rates, corporation tax, stamp duty and other contributions - in 2019, their corporation tax bill was just £14.5m.

Something is clearly in need of adjustment. Extrapolating from Amazon’s 30% market share of all UK online retail sales, it would imply that the whole of this online sector would contribute less than £1 billion: and yet it is displacing businesses which have shouldered a much greater proportion of the UK tax burden.

So, as the Sunday Times forecast yesterday, there is bound to be a re-balancing between online and physical retail, with a new online purchase tax contrasted with financial incentives for local businesses to get moving and employing again. I suspect that Jeff Bezos can see the writing on the wall, hence his move away from the hot seat while the going is good.

We have argued in this commentary for a radical programme of customer share ownership, for Amazon and the other tech giants. There's not much sign of that at present, but with nearly 500 million customers worldwide (that's nearly 7% of the whole world population), perhaps Mr Bezos should start thinking outside the box. It would certainly provide a popular mandate to help him resist some of the most extreme calls for anti-trust action.

And what of Bezos himself? He's only 57 years old, and his Wikipedia entry sets out his wide range of interests, several of which are philanthropic: the Day 1 Families Fund is one such example.

However, he clearly feels deeply the attraction of space exploration, with his Blue Origin initiative started in September 2000, and his acquisition of the Washington Post in August 2013.

These mixed pointers suggest that it will be difficult to predict how his career will develop over the coming years. I would like to feel that he could develop a close interest in egalitarian capitalism, but there's no indication of a move in that direction at present.

Many successful entrepreneurs are keen to empower and enthuse the next generation with their time and experience - will Jeff Bezos show such a public spirit, or will he settle back to enjoy the life of the super-rich?

Undoubtedly, it has been the pandemic (see stats for the past fortnight below) which has pushed Amazon into stratospheric earnings in 2020 and, as the intensive vaccination programme starts to open up the UK and US economies, we may see more subdued results for Amazon in the next few years.

However, it is right to salute Jeff Bezos for an extraordinary achievement, and to wish him well for his future beyond Amazon.

Jeff Bezos deserves due credit for his amazing achievement with Amazon ..

Twenty-five years ago, he was selling books out of his garage in Seattle: now he's vying with Elon Musk to be the world's richest person.

.. establishing the company's need to scale its operations to produce market dominance.