Is Elizabeth Warren an egalitarian capitalist, or a socialist?

“I am a free man, an American, a United States Senator, and a Democrat, in that order.”

Welcome to the 100th edition of this commentary. As you’ll be aware, we cover a wide horizon: from politics and economics to social justice, faith and the environment. Because Share Radio is no longer regulated (since exiting DAB transmission in May 2017), our commentary can be opinionated (just as it often is in the print media), and it frequently is.

Egalitarian Capitalism is a common thread, and that’s rooted in the word ‘Share’. It deliberately combines access for all to the free market with a generosity of spirit, and a passion for empowering disadvantaged young people. Generosity of spirit - or anything else, for that matter - has an uncanny way of delivering abundance in return.

This commentary takes a look at how things could possibly move in this direction in the United States, as Elizabeth Warren climbs up the rankings of Democratic hopefuls for the 2020 presidential race.

I have always believed that it’s easier to move those who believe in free market capitalism to become egalitarian in their approach than it is to move a socialist to believe in individual ownership. However I must confess to being genuinely puzzled by Elizabeth Warren.

There was a particularly good editorial in the Telegraph business section last Tuesday written by Matthew Lynn, setting out the radical agenda which Elizabeth Warren is advocating, ‘Business should learn to fear presidential hopeful Warren’. However, if she is espousing egalitarian capitalism, I would say that business has little to fear and much to celebrate. After all, it’s only a few weeks since BT’s new Chief Executive, Philip Jansen, introduced a radical new plan for employee participation saying: ‘Is this a move to a more inclusive form of capitalism from BT? It absolutely is, and it is just the first part’.

Much of Elizabeth Warren’s agenda echoes the objectives and principles of egalitarian capitalism - challenging excessive financial intermediation, empowering disadvantaged young people - and yet there are definite streaks of socialism there, from imposition of wealth taxes to workers’ cooperatives (in the John McDonnell mould). What is not immediately apparent is: what are the underlying principles behind her manifesto? 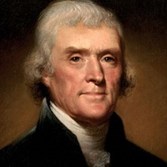 In contrast, the egalitarian capitalist agenda is rooted firmly in those principles set out by one of the greatest US presidents, Thomas Jefferson:

“We hold these truths to be self-evident:

It is an agenda based firmly on individual ownership and free enterprise, recognising the close link between ownership and responsibility: and how that can help draw society together. It also sees empowerment of disadvantaged young people as essential to enabling inter-generational wealth rebalancing, rather than a state-centred process of wealth redistribution.

In her political career, Elizabeth Warren has been both Republican and a Democrat, which only serves to increase my puzzlement.

It may surprise UK listeners to discover that their interest in Share Radio is broadly shared in the United States: nearly a third of those opening this newsletter are across the Atlantic. So I would much like to hear from anyone with first-hand experience of Elizabeth Warren and her agenda. Is this another manifestation of egalitarian capitalism, or a confusion of socialist-inspired measures with a broad theme of social justice? Please find my email address at the foot of this commentary, and let us know if you're content to have your views anonymously published therein.

One clear link with Elizabeth Warren’s agenda is disintermediation, an approach which was also deeply rooted in the ‘Occupy’ movement (so evident in Massachusetts, the state which she now represents in the US Senate). It emerges not only in her aim to level the playing field for private equity (e.g. making these managers liable for the debts of the companies they own), but also in breaking up the world domination of tech giants so that they can no longer act as both principal and agent, selling their own products via their own platforms.

We have advocated a rather different approach to tech giants, based on empowering their huge customer bases with shares in their own businesses: possibly thereby re-paying the value endowed to them through their ability to harvest data. It’s again a very different approach to Elizabeth Warren’s, since it’s based on individual, rather than state, empowerment.

The next two years are going to ask a lot of questions of what sort of society we want to inhabit: in the United Kingdom, the United States, and Europe. Our advocacy of egalitarian capitalism is a fresh approach to issues which have challenged us for generations - on 28th May, we set out what it would mean here in the United Kingdom.

If I had to pick one theme from our last 100 commentaries, it would be this: for the generosity of spirit which underpins it has such immense potential to create abundance, and a sense of fulfilment, for all.

Egalitarian Capitalism is a common thread in our first 100 commentaries, rooted in the name ‘Share’ and combining access for all to the free market with a passion for empowering disadvantaged young people

.. how generosity gives rise to abundance