“Egalitarian: something close to equality and has to do with fairness. If you believe that everyone deserves a chance to vote, go to school, get good jobs, and participate in society, then you are an egalitarian. When laws make life fairer, the law is getting more egalitarian. The opposite of an egalitarian system could be a fascist society or dictatorship. When you see this word, think about equality and freedom.”

The news that Rory Stewart is standing down at the General Election to run as an independent for Mayor of London opens a new chapter for UK politics. Following hard on the heels of Sajid Javid’s speech in Manchester which was radically different to conventional conservatism, this newly independent ex-cabinet minister reflected, in his Evening Standard leading article on Friday, a real willingness to walk alongside people, not just pontificate from the ivory towers of Westminster.

While the Labour Party speak of levelling down by driving businesses and wealth away from the United Kingdom with huge increases in corporate and personal taxation, nationalisation and confiscation, the new language of Conservatism (and conservative Independents such as Rory) is levelling up: bringing hope and opportunity through increased spending on education and infrastructure.

So please read on as we review the changing landscape in British politics, in preparation for the post-Brexit economy.

Those who used to bemoan the similarity between the main political parties have certainly seen their wishes delivered over the past three weeks. Just to take three examples:

The mantle combining freedom of the individual while seeking an egalitarian society through giving hope and opportunity is increasingly being shouldered by the Conservatives, and we will hear much more of this in the Queen’s Speech on 14th October. The Government is increasingly acknowledging the call for egalitarian capitalism, which we made on 28th May.

There are two major components of egalitarian capitalism. The first is to transform the opportunity for people across the United Kingdom in order to build a sense of ownership of the businesses which they work in and use day by day, thereby developing much greater harmony and responsibility for the UK’s economic success. This will be critically important as we move beyond Brexit, to seek opportunities for world trade.

As foreshadowed in last week’s commentary, Capital Economics set a challenging environment for globalisation last Tuesday in their annual conference. In particular, they focused on the political challenge of the rise of China emphasising its clear choice not to embrace the liberal democracy of the West, thus sparking the riots we are seeing in Hong Kong. 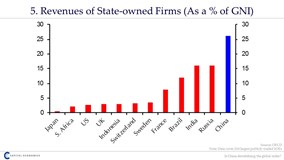 One of their charts showed the revenues of state-owned firms as a percentage of Gross National Income. As the chart shows, it is highest in China - but it is still only 26%. This means that even in China there is a huge entrepreneurial cohort who are the learning the benefits of share owner democracy, and through whom lies the best hope of achieving Bill Clinton’s prediction of March 2000: “By joining the World Trade Organisation, China … is agreeing to import one of democracy’s most cherished values: economic freedom …  and that may lead to profound change. The genie of freedom will not go back into the bottle”.

The other major component of egalitarian capitalism is to bring hope and opportunity to young people, particularly those from disadvantaged backgrounds. The Child Trust Fund (CTF) is central to this aim. Over the eight years from September 2020, almost every young person will reach adulthood with one of these individual accounts. Gordon Brown’s Treasury team referred to the scheme as ‘asset-based welfare’. I would describe its potential as ‘asset-based empowerment’.

The problem is that c. two million of the six million CTF accounts are lost to the families concerned, and The Share Foundation has therefore set in motion a major programme to recover its potential. There have been two major developments over the past month:

The Child Trust Fund is not just a pot of money to help young people starting adult life: it is also a catalyst for life skills and financial awareness. So The Share Foundation will provide easy access to ‘Managing My Money’, Share Radio’s very accessible eight week course, based on the Open University course of the same name.

That’s why the description ‘asset-based empowerment’ is so apt.

So we look forward to playing a key role in the new post-Brexit world, helping people across the United Kingdom, and young people in particular, to play their part in unleashing our country’s economic potential.

speaking at the Conservative conference (click for full text)