“And a thousand thousand slimy things lived on; and so did I.”

There are three astonishing facts which called for the one trillion multiplier this week:

So, in this commentary we track back over proposals which we’ve made to tackle these huge excesses, because tackle them we must.

A beaming Tim Cook welcomed the astonishing rise in the value of Apple stock last week - all the more impressive because of its bounce-back from a humble $1 trillion in March to reach its current lofty heights. The company’s valuation is now only just short of all companies in the UK FTSE 100.

Money has no value in heaven but, if it did, Steve Jobs could be forgiven for feeling a sense of pride. It is his insistence on quality of production and presentation, combined with an exclusive approach to technology containing everything you buy on their platform and not allowing you to remove it, which results in people paying over the odds and maintaining their subscriptions.

It’s not an approach which aligns with a truly competitive market economy and, if that quality were to give way, others would step in: but there’s no indication of that happening any time soon.

So Apple continues to hoover up cash, and the only sensible way for regulators to tackle their restrictive practices is by requiring them to issue equity shares in return for data storage and harvesting, as we proposed on 10th August.

It’s a strange irony that Government debt - whether UK, US or EU - should be hitting such extraordinarily high levels, completely opposite to the wealth wrapped up in Apple stock. But, as we commented on 13th July, technology gives us the answer here too, providing central banks with the opportunity to cancel their holdings of Government debt without fear of inflation (notwithstanding last week’s blip in the UK rate).

There are a number of approaches by which this could be carried out, as I was recently informed by Capital Economics: 'an alternative [to cancelling the debt] is that the government could swap the debt for a perpetual bond issued to the central bank .. or the Bank could just keep the bonds as assets on its balance sheet - marked at the par value - in which case you still have a corresponding permanent increase in the money supply'.

I do hope, as the virus emergency continues to exact its deadly toll on both human life and on the world economy, that this sort of urgent planning is underway between the central banks of the free world in order to lift the threat of increased taxation as we go through this autumn. The world cannot cope, and should not cope, with a return to austerity. 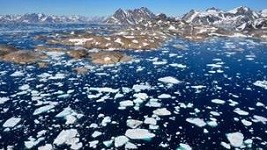 These are both comparatively short-term issues: in contrast, it’s being quite a long time since we addressed what will be the biggest problem of the century - how to cope with rising sea levels.

We heard last week that 2019 was by far the highest in terms of meltwater raising sea levels, and that our projections for 2100 are far too modest.

There should be two reactions to this news: one, to re-double our efforts to stop reducing greenhouse gases, and the other - to start planning much more seriously on how to deal with the consequences. Our concern is that this latter mitigation approach is receiving far too little attention.

On 5th August 2019, we focused on one major area which could be a focus for mitigation: building a barrage across the Straits of Gibraltar in order to save populations living around the Mediterranean – it’s now been estimated that the cost would be c. $275bn, but the benefits would be massive. There are several other areas where major planning could get underway - for example, by construction of a barrage across the Skagerrak to protect the Baltic. And, just as London planned ahead by building the Thames Barrier, cities such as San Francisco and Sydney, which could be defended, need to start planning urgently for coastal defence.

However hard we work to eliminate carbon from the atmosphere, we will not stop sea level rising massively in our grandchildren’s lifetimes. It is our duty to look ahead, and to explore what can be done now in order to cause less distress in future. The Smithsonian TV channel’s ‘Earth Under Water’ is well worth watching in this regard.

We must get a grip on what ‘trillions’ mean, and take action accordingly.

We count the stars in trillions: we must learn to do the same with Government debt, the value of Apple Inc. and the tonnes of meltwater causing sea levels to rise

'The fourth planet belonged to a businessman. This man was so much occupied that he did not even raise his head at the little prince's arrival ..'

Trillions of tonnes of meltwater fill the oceans