What levelling-up should mean

In his Spending Review last week, Rishi Sunak made a determined effort to start the process of ‘levelling up’ with public spending. We all know, however, that levelling-up is about much more than providing a boost for economic activity in certain regions of the country: it’s about people feeling in control of their lives, and having the same opportunity to participate as those who are already in that ‘levelled-up’ state.

This is not just a short-term endeavour: it’s calling for a permanent re-structuring which results in genuine ownership and responsibility. It’s inter-generational, and it means tackling both wealth polarisation and the huge shortfall in financial awareness.

So, in this commentary we focus on what levelling-up should mean to achieve a permanent change from which all can benefit. And we’ll consider some potential elephant traps on the way, such as the property industry taking advantage of people through ‘shared ownership’, as exposed on BBC’s Panorama last week. 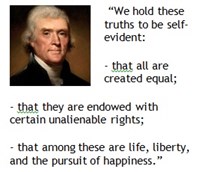 At the heart of a levelled-up society must be the principles of free enterprise and individual liberty as espoused by Thomas Jefferson 200 years ago.

Levelling-up is about having a genuine sense of ownership and feeling in control of one’s destiny.

It is not primarily about public spending, although of course that can help. It’s not primarily geographical: that may be politically relevant, but poverty and disadvantage exist throughout the United Kingdom, and across the world. And it’s not about searching for short-term palliatives: it’s about looking for a permanent structural change which will fire up each new generation with the resources and life skills needed to achieve their own potential.

If we can introduce a reliable model for ‘levelling-up’ in the United Kingdom, it should be exportable: we can literally change the world with this new approach to economics.

The alternatives which have failed include socialism, excess intermediation by state or financial institutions, and raw capitalism through which the rich get richer and the poor, poorer: the stark evidence of these failures stands out for all to see in the collapse of the Soviet Union, the 2008 financial crash and various violent revolutions over hundreds of years, respectively.

We must rather focus on where we need to start - with that sense of individual ownership and control, and individual liberty.

Let’s first call out some examples of compromised ‘ownership’, which invariably involve insufficiently regulated intermediaries tying down the individual: or worse, dressing something up as ‘ownership’ when it is nothing of the sort. The worst sector for these excesses is property.

While access to mortgages has enabled a huge expansion of formal ownership, being in hock to the bank for decades is not a liberating experience. This has, of course, been exacerbated by a market overheated for years by rock-bottom interest rates and our national addiction to debt.

But even worse is the concept of so-called ‘shared ownership’, which was exposed in last week’s Panorama programme. Here we see medium-term leases, which combine a small proportion of capital gain upside potential with 100% liability for costs and unlimited exposure to increases in service charges, being masqueraded under the name of ‘ownership’: where the property ‘partner’ dictates all the terms for a locked-in tenant with very little regulatory oversight.

This provides no genuine sense of ownership, and to employ that name in its description severely undermines the values promoted by Thomas Jefferson.

So, what should levelling-up mean?

It should enable people from all walks of life to make the journey from working for money towards the point where money works for them, so that we no longer see capital and labour as protagonists across society; but where both are available to all. And, recognising of course that things can go wrong for anyone at any time in this life, there needs to be a safety net of public support to ensure that those who get unstuck do not fall into destitution.

There are two strands to this approach: the first, for our current adult generations, and the second, for the young, and generations to come.

For adults, it means a programme of determined capital participation - what we describe as egalitarian capitalism. Some might claim that the term ‘egalitarian’ does not correspond with the basic tenets of capitalism: but that only serves to explain the problem with the traditional view of capitalism. Over the past five years, we have waxed lyrical on the key ingredients for this capital participation for all, and have recently looked closely at a radical new opportunity to achieve this through the tech giants.

But of course, a permanent re-structuring to enable capital participation for all also means applying an inter-generational ratchet in order to ensure that each new generation is endowed with the opportunity to achieve their full potential.

In a society where, as David Willetts has explained in his book ‘the Pinch’, the vertical link between generations is so strained, this is particularly relevant. For example, there are proportionately far more young people born into disadvantaged black and minority ethnic families than into those of wealthy white people. If no ratchet is applied to capitalism, their only economic hope for the future is through state intervention.

So that’s why we have made specific proposals for inter-generational rebalancing, including incentivised learning, which will achieve the permanent change for which we’re seeking.

People don’t like the removal of their control over their own lives, whether as the result of the state or excess intermediation by financial institutions. And people don’t like living in a society where the rich get richer and the poor, poorer.

These are the reasons why genuine levelling-up matters, and why it will take much more than boosting public spending in the northern regions to achieve.

One of his key aims is to address the levelling-up agenda, but we recommend going far beyond public spending to achieve this ..

.. with a plan to introduce the twin pillars of egalitarian capitalism ..

.. participation for all, with a special focus on giant tech, and inter-generational rebalancing