Guiding Principles for our first 250

“A highly developed values system is like a compass. It serves as a guide to point you in the right direction when you are lost.”

… or, to paraphrase a quotation from 'The Electrical Life of Louis Wain': ‘we are all prisms through which the beam of life refracts: so let's share these value systems with as many people as we can’.

Welcome to our 250th commentary, produced over these last five years since Share Radio moved to 100% online broadcasting. It's been a period of massive change and increasing clarity on what we need to do to sort out the problems of the world, and we hope these thoughts are making some contribution in that respect.

To mark this staging point it might be helpful to set out some of the guiding principles which have steered, and will continue to steer, our comment: on politics (including Brexit), business and economics (including egalitarian capitalism), empowering young people, and the spiritual dimension.

There is much less objectivity than you'd expect to find on the BBC (whether you do receive it or not on their channels is a different matter). I have never understood why UK commercial DAB broadcasters are chained to political neutrality by Ofcom when newspapers are allowed to say what they like (as long as it's decent, honest and truthful — but it's not always that!).

Let's start with politics — with a small ‘p’.

Many listeners, particularly during the Brexit shenanigans, may have concluded that our stance is distinctly conservative. 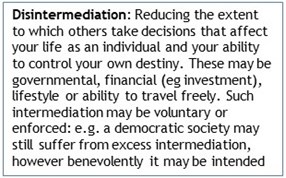 However it is our passion for a more egalitarian form of capitalism which is our guiding principle — and that calls for disintermediation, where individual freedom takes precedence over state control, for mass participation (where ownership and responsibility go hand in hand at an individual level), and for inter-generational rebalancing which aims to empower young people to achieve their potential as adults no matter what may be their start in life.

We’re called ‘Share’ as a ‘double-entendre’, in order to combine our passion for individual ownership right across society with a real generosity of spirit.

In economics, egalitarian capitalism again holds the key, and we have proposed some radical solutions called 'Stock for Data' to enable the majority of the world's population to share in the wealth created by technology, while at the same time proposing an alternative to 'Universal Basic Income'. However, during nearly eighty years since the end of the second world war, we have indulged in a massive orgy of public spending initiated by a socialist, and heavily intermediated, welfare ideology. The application of universal benefits has been exacerbated by an indulgence in electoral bribery from all political parties, in the provision of health, travel and many other services to all whether they could afford it or not, thus undermining our ability to target help where it’s really needed.

But debt-fuelled economics doesn't end there — in the private sector it has driven property prices to completely unaffordable levels for the young, denying them the opportunity to experience individual ownership and responsibility at first hand. Excess debt is a cruel scourge for inter-generational equity, consuming tomorrow's resources in order to burn them on today's pleasures.

This brings us to the guiding principles for empowering young people, starting with a firm belief that the same range of potential is to be found in all humans at birth, and it calls for those in older, living generations to do everything possible to enable each young person to achieve their potential as an adult.

Generally, this means not only learning life skills but also building some resources with which to get started. However, it's not just a matter of providing comprehensive education and some grants: there’s also the need to understand the psychology of that empowerment, especially when everything in their formative years speaks of the cycle of deprivation (which Sir Keith Joseph promised to break nearly fifty years ago, but is still very much with us today). That's where incentivised learning provides a really valuable pathway to help make this happen, and the SHARE project at Cambridge will explore all these aspects.

Financial awareness life skills are particularly important for women, where the disruption of family formation has still not been addressed with a balanced approach to personal finance: last week I came across an excellent short video from Ipsos Mori called 'Mind the Gender Gap' setting out the challenge.

It was only last week that we spoke of timeline poverty, and this is the challenge at the heart of providing a decent environment for future generations, including both the natural world and the global economy. It also calls for a political system which enables representation with a priority for the long term; all forms of current governance have a significant deficit in this regard. In the democratic world, electoral cycles are typically just 4-5 years; and in autocratic regimes, communist or otherwise, the prime interest is more in their survival than it is for the long-term (perhaps Lenin should have thought more about that when he established the ‘dictatorship of the proletariat’).

Paradoxically, it seems that only monarchical families are capable of concentrating on long-term inter-generational interests. In the United Kingdom we could also try re-modelling the second chamber of Parliament to reflect long-term democratic interests, but there is little sign of that at present.

The over-arching guiding principle is that generosity of spirit inherent in our ‘Share’ name, and which is founded on unconditional love. Modelled on the miraculous abundance in the feeding of the 5,000, this not only points to mass participation and global convergence but it is also open to exploring our spiritual existence.

As a Christian with nearly thirty years’ experience of governance in the Church of England, I am more than ever aware that it is this unconditional love of which Jesus speaks, and not the church itself, which is our true faith. I've just re-read ‘Jonathan Livingston Seagull’ after many decades, complete with its recently-discovered Part 4, providing a wonderful allegory of the contrast between spiritual reality and the established church.

But there is also a deep appreciation that we need to call it ‘faith’ because we don't yet understand God’s technology in the spiritual world. We're getting very close to it now — quantum mechanics brings us a tantalisingly close glimpse of the world of the spirit, and Seagull author Richard Bach touches on some of this in his book.

So, this brings me to the final guiding principle for these first 250 commentaries — Logic. As an example in respect of our spiritual existence: if even a small part of you thinks that that you will experience life after death, it has to be recognisable in order to be meaningful. It is therefore a logical sequitur that your memory must be in your soul, not in this extraordinary physical organ which we call our brain; which must therefore act as a communication router/modem and an information processor.

And on that basis, I hope there'll be many more commentaries to come in the years ahead …

The feeding of the 5,000 was made possible by the generosity of a young person and the power of unconditional love: that same generosity of spirit fuels our quest for egalitarian capitalism today ..

.. but it's not an intermediated thing. It achieves individual empowerment in the same way as Thomas Jefferson when he spoke of liberty, equality and pursuit of happiness for all

Inter-generational rebalancing is a central part of our quest for egalitarian capitalism ..